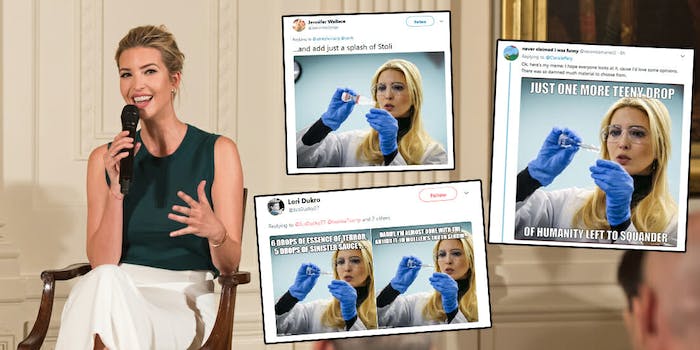 Ivanka Trump, the daughter and adviser of President Donald Trump, posted a photo of herself on Instagram to promote “infrastructure in Iowa” on Monday. It quickly became a mocking meme.

While there, she wore the lab attire while testing the nicotine content of “vape juice” used in e-cigarettes, according to the news outlet.

“I can’t promise that I’ll get this right, but at least we’ll look the part, right?” she said.

The “look” was too much for Twitter not to turn into an instant meme.

Ok, here’s my meme; I hope everyone looks at it, cause I’d love some opinions. There was so damned much material to choose from. pic.twitter.com/Ko2XSUWI4H

when the receipie calls for the tears of exactly four poor children pic.twitter.com/uPet5U43Z2

…and add just a splash of Stoli pic.twitter.com/pGckh7taZ8

And of course–given Ivanka Trump’s scientist outfit–someone had to bring up the “I’m something of a scientist myself” meme. But hey, at least she’s officially no longer in her punk rock phase.