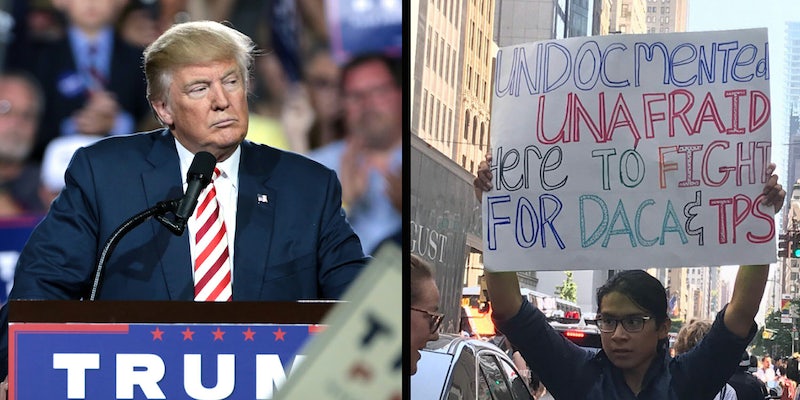 Is DACA really unconstitutional, as the Trump administration claims?

It all comes down to the Supreme Court.

President Donald Trump’s administration terminated the Deferred Action for Childhood Arrivals (DACA) program on Tuesday, leaving 800,000 recipients of the program in a state of limbo regarding their immigration status.

The DACA program shields young undocumented immigrants who entered the United States as children from deportation for two years after undergoing an application process.

While members of Trump’s administration, including Attorney General Jeff Sessions, called DACA “unconstitutional,” other lawmakers, such as former President Barack Obama, defended the program, arguing that courts have decided that it was allowed to go forward.

The program’s termination, which is being delayed for six months, sparked protests across the country.

But is DACA really unconstitutional, as members of the Trump administration have claimed?

The short answer is, the Supreme Court has yet to rule on its constitutionality, so calling it “unconstitutional” is presumptive. And while the program has vocal opponents, legal experts largely argue that the program is not only constitutional but based on commonplace practices.

You can see how this debate plays out in real time, here:

What the courts have decided

In June 2016, the Supreme Court ruled 4-4 in a case that challenged Obama’s DACA program. The court remained deadlocked due to the Senate’s refusal to have confirmation hearings for Obama’s Supreme Court Justice nominee, Judge Merrick Garland. With Trump-nominated Justice Neil Gorsuch, a staunch conservative, now on the court, it is unlikely DACA would survive a Supreme Court challenge—not to mention the question of whether the Trump administration would even defend the program.

Before the Supreme Court case, federal Judge Andrew Hansen, who has a long line of anti-immigration sentiments, ordered a halt to DACA expansion and its companion program, DAPA, which proposed rules for parents of undocumented immigrants. On appeal, the case was assigned to United States Court of Appeals for the Fifth Circuit, which blocked DAPA and DACA expansion in late 2015—but not on constitutional grounds. Obama’s original 2012 executive order instituting DACA remained in place.

While the fate of DACA was left in a state of uncertainty due to the even number of judges on the Supreme Court in 2016, it’s not uncommon for presidents to allow certain groups of immigrants to enter the United States on a temporary basis. Importantly, so-called deferred action is constitutional, according to a group of more than 100 law professors who spoke out in favor of DACA, and often used to help better utilize limited government resources.

The group of legal experts wrote in an open letter:

Prosecutorial discretion exists because the government has limited resources and lacks the ability to enforce the law against the entire undocumented population. Recognizing this resource limitation, Congress has charged the Secretary of [the Department of Homeland Security] with ‘establishing national immigration enforcement policies and priorities.’ Prosecutorial discretion and policies like DACA 2012 also have a humanitarian dimension, and such factors have long driven deferred action decisions. Finally, DACA 2012 has been an unqualified policy success, allowing over three-quarters of a million recipients to continue their education, receive professional licensing, find employment, and pay taxes into Social Security and other tax coffers.

Several states told Sessions that they would sue the government if they did not terminate DACA by Sept. 5, prompting Tuesday’s announcement.

“The ultimate legal authority for DACA lies in the U.S. Constitution,” Tan wrote. “Article II, Section Three of the Constitution states that the president ‘shall take Care that the Laws be faithfully executed.’ Carrying out our immigration laws involves deciding who should be targeted for deportation and who should be allowed to stay.”

When Trump was elected, he had said on multiple occasions that DACA wouldn’t be in his crosshairs, adding that those who were recipients of the program should “rest easy.”

On Tuesday, Sessions and White House Press Secretary Sarah Huckabee Sanders called into question the legality of DACA. While Sessions called the program “unconstitutional,” Sanders echoed this assertion, calling it both “unconstitutional” and “in clear violation of federal law.”

“It’s not cold-hearted for the President to uphold the law,” she said. “We are a nation of law and order and the day that we start to ignore the fact that we are that, then we throw away everything that gives these people a reason to want to come to our country. If we stop becoming the country that we were envisioned to be, then we throw away what makes us special, which makes America unique. This President’s not willing to do that. The previous administration was, this one isn’t.”

Sessions also said DACA contributed to a “surge of minors” crossing the border, which at least one study found was primarily due to increasing violence and economic conditions in Central America rather than Obama’s immigration policy for younger people.