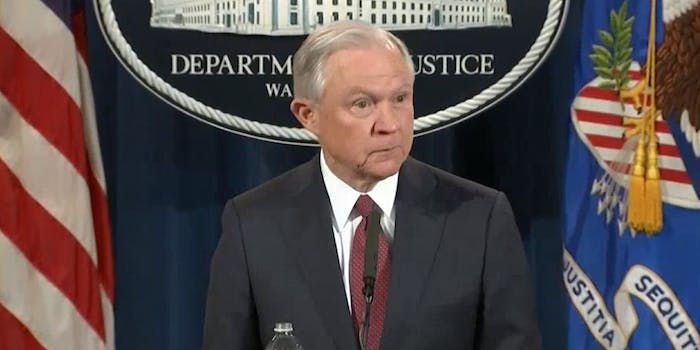 The decision contradicts statements Trump has made in the past.

Attorney General Jeff Sessions said on Tuesday that the Deferred Action for Childhood Arrivals (DACA) program is “being rescinded.”

The program shields undocumented immigrants who arrived in the United States as children from deportation. With the move to end the program, more than 800,000 beneficiaries of the program will face an “orderly wind down” of DACA, which was enacted by President Barack Obama in 2012.

“To have a lawful system of immigration that serves the national interest, we cannot admit everyone who would like to come here,” Sessions said in his prepared remarks. “That is an open border policy and the American people have rightly rejected it. Therefore, the nation must set and enforce a limit on how many immigrants we admit each year and that means all can not be accepted. “This does not mean they are bad people or that our nation disrespects or demeans them in any way,” Sessions continued. “It means we are properly enforcing our laws as Congress has passed them.”

By ending the program, Trump contradicted several statements in the past where he signaled that recipients of the program could “rest easy.”

“The policy was implemented unilaterally to great controversy and legal concern,” Sessions said. “The executive branch, through DACA, deliberately sought to achieve what the legislative branch specifically refused to authorize on multiple occasions. Such an open ended circumvention of immigration laws was an unconstitutional exercise of authority by the executive branch.”

Sessions did not take questions from reporters while making the announcement.

Although DACA opponents argue that the policy is unconstitutional, it has survived every legal challenge brought forth against it.

“To be clear, a decision to abandon the DACA program would be a political decision—not a legal one,” writes Michael Tan, a staff attorney with the American Civil Liberties Union’s Immigrants Rights Project. “In fact, the U.S. government has repeatedly—and successfully—defended DACA against constitutional challenges. Indeed, every legal challenge to the DACA program has failed.”

Trump hinted at the decision during a Tuesday morning tweet.

“Congress, get ready to do your job – DACA!” Trump wrote.

By ending DACA, Trump has put the onus on Congress to craft legislation that would create immigration parameters for recipients of the Obama-era program.

In a statement, House Speaker Paul Ryan (R-Wisc.) said it is “important” for the “young people who came to this country through no fault of their own” to “have clarity” on how the “interim” period between now and when DACA is set to expire “will be carried out.”

“It is my hope that the House and Senate, with the president’s leadership, will be able to find consensus on a permanent legislative solution that includes ensuring that those who have done nothing wrong can still contribute as a valued part of this great country,” Ryan said.

The Department of Homeland Security said it would no longer accept new applications for the program and those currently enrolled in the program can continue working until their permits expire.

As Trump’s administration raised the possibility of terminating the program, it was met with resistance from both Democrats and Republicans and other groups, including technology companies.

Obama is expected to speak out against the decision by President Donald Trump’s administration.