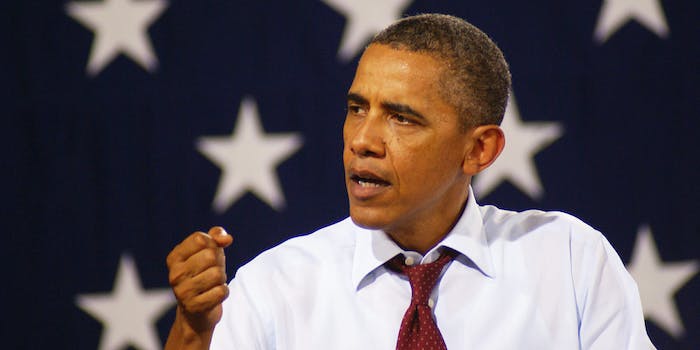 'Kicking them out won’t lower the unemployment rate, or lighten anyone’s taxes, or raise anybody’s wages.'

Obama was rumored to speak out against the decision, which Attorney General Jeff Sessions announced during a short press conference on Tuesday. The move to terminate DACA, which shields young undocumented immigrants who arrived in the United States as children from deportation, leaves more than 800,000 people in a state of limbo.

“To target these young people is wrong—because they have done nothing wrong,” Obama wrote on Facebook. “It is self-defeating—because they want to start new businesses, staff our labs, serve in our military, and otherwise contribute to the country we love. And it is cruel.”

Obama began his post calling immigration a “controversial topic,” but said the action taken by Trump’s administration undercut the lives of young people in America who are “Americans in their hearts, in their minds, in every single way but one: on paper.”

The DACA program is set to expire on March 5, 2018, according to administration officials, unless Congress is able to address the matter through immigration reform legislation. President Donald Trump and members of his administration have urged lawmakers to pass a legislative solution.

The decision sparked numerous protests across the country on Tuesday afternoon.

Immigration can be a controversial topic. We all want safe, secure borders and a dynamic economy, and people of goodwill…

Obama questioned the reasoning behind threatening the legal status of hundreds of thousands of people who have contributed to the country and were protected by DACA.

“Kicking them out won’t lower the unemployment rate, or lighten anyone’s taxes, or raise anybody’s wages,” Obama wrote. “It is precisely because this action is contrary to our spirit, and to common sense, that business leaders, faith leaders, economists, and Americans of all political stripes called on the administration not to do what it did today.”

During his press conference on Tuesday, Sessions said DACA, which was enacted through an executive order signed by Obama in 2012, was an “unconstitutional exercise of authority by the executive branch.”

Obama echoed that assessment, before ending his response by calling the decision to terminate DACA a disregard for “what makes us American.”

“What makes us American is our fidelity to a set of ideals—that all of us are created equal; that all of us deserve the chance to make of our lives what we will; that all of us share an obligation to stand up, speak out, and secure our most cherished values for the next generation,” he wrote. “That’s how America has traveled this far. That’s how, if we keep at it, we will ultimately reach that more perfect union.”