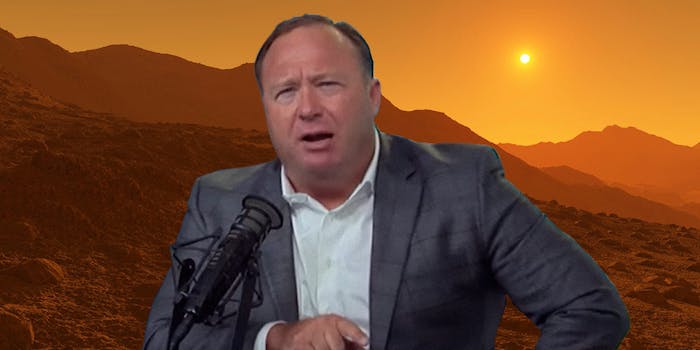 NASA denies that there is any such colony on Mars.

Alex Jones, the loud-mouthed host of InfoWars, is known to puppet wild—and false—conspiracies on a daily basis. But a recent conversation Jones had with a guest about a child slave colony on Mars is certainly one of his weirdest topics of interest.

Jones had Robert David Steele, a supporter of President Donald Trump and former Central Intelligence Agency case officer, on as a guest, and the subject of a child slave colony on Mars quickly became a point of discussion.

“This may strike your listeners as way out, but we actually believe that there is a colony on Mars that is populated by children who were kidnapped and sent into space on a 20-year ride,” Steele said. “So that once they get to Mars they have no alternative but to be slaves on the Mars colony.”

Seeing an opportunity, Jones jumped on the chance to take it further.

“Look, I know that 90 percent of the NASA missions are secret, and I’ve been told by high-level NASA engineers that you have no idea, there is so much stuff going on,” Jones said. “But then it goes off into all that, that’s the kind of thing media jumps on. But I know this: We see a bunch of mechanical wreckage on Mars, and people say, ‘Oh look, it looks like mechanics.’ They go, ‘Oh, you’re a conspiracy theorist.’ Clearly, they don’t want us looking into what is happening. Every time probes go over they turn them off.”

The two went on a bit of a tangent after that, where Steele compliments Jones and his program before returning back to the Mars conspiracy.

“Well, I don’t know about Mars bases, but I know they’ve created massive, thousands of different types of chimeras that are alien lifeforms on this earth now,” Jones said.

As you might expect, NASA denied having a colony of kidnapped children working as slaves on Mars.

While a child slave colony on the red planet seems crazy, just remember that Jones is known for pushing absurd conspiracies including: Sandy Hook being a false-flag operation and the baseless Pizzagate conspiracy that claimed Hillary Clinton’s campaign ran a child sex ring in the basement of a Washington, D.C., pizza joint.

If you really want to, you can watch the whole child colony on Mars discussion here: