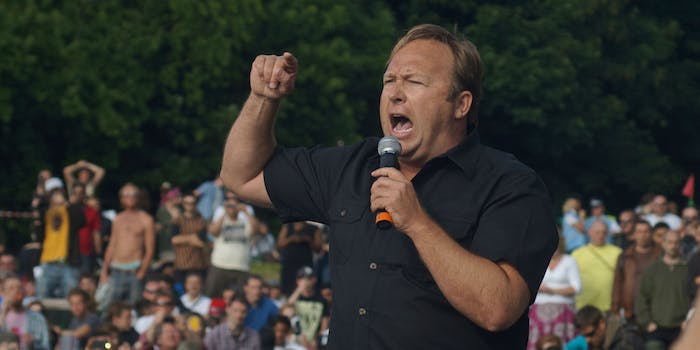 Jones' beliefs are horrifying to families that lost loved ones during 9/11 and Sandy Hook.

Sunday Night with Megyn Kelly is finally airing on NBC, and Kelly is bringing on a controversial media figure to help boost the show. On June 18th, she will interview InfoWars radio show host Alex Jones. And many NBC viewers are furious with Kelly’s decision, arguing that the interview will give legitimacy to Jones’ beliefs.

Jones is a conspiracy theorist known for stoking a wide range of claims, targeting everything from GMOs to President Obama. Previously, he’s argued that 9/11 was an “inside job,” he’s claimed that the Sandy Hook Elementary School shooting was faked, and he believes the government has been working on a gay bomb. Concerned NBC viewers are worried that, by giving Jones a position to talk about these beliefs, he may spread his following and cause further pain to the families that lost loved ones during 9/11 and Sandy Hook.

Liberalism in the USA looks like NBC handing conservative reactionary Megyn Kelly a platform so she can "interview" people like Alex Jones.

Megyn Kelly to use platform at NBC to be megaphone for Alex Jones.
Sandy Hook Truther, Alex Jones.
/1 pic.twitter.com/jcMPZZ8Sl5

Don't give scumbag Alex Jones TV time on NBC. Are you only going to interview monsters, Megyn?

Kelly responded to some of the backlash by suggesting that her role as a journalist is to “shine a light” on some of Jones’ beliefs. But others still feel her actions are reckless, giving credibility to a far-right conspiracy theorist.

POTUS's been on & praises @RealAlexJones' show. He's giving Infowars a WH press credential. Many don't know him; our job is 2 shine a light. https://t.co/5e88BJyqnz

Many pointed out that the interview would land on Father’s Day, sending a harrowing message to the families that lost their loved ones during the Sandy Hook shooting.

Because this is what it looks like when you shine light on #AlexJones – they don't go away. They double down @megynkelly . #SandyHook pic.twitter.com/GjeBVpC6HR

This is airing on Father's Day. Imagine losing your child in a shooting while the man who denies it happened gets an interview. #ShameOnNBC

Danielle Vabner lost her younger brother during the Sandy Hook shooting, and previously wrote about her dedication to gun violence prevention for the Daily Dot.