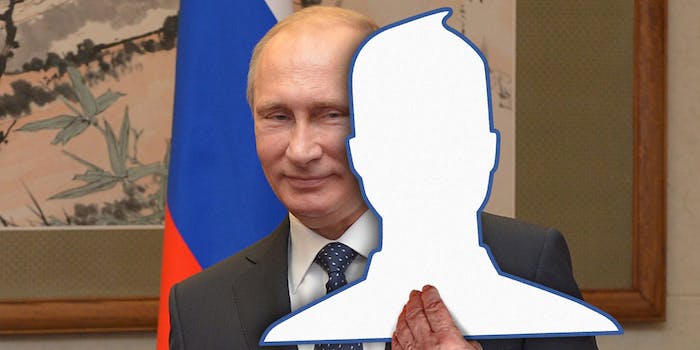 The Honest Ads Act could have major implications for U.S. elections—and the internet.

Political ads on the internet may soon reveal far more about the people behind them—if Silicon Valley doesn’t get its way.

Bipartisan legislation introduced in Congress on Thursday would require political ads sold online to disclose the entities who purchased those ads. The companion bills, introduced in the Senate and House of Representatives, come in response to more than $100,000 in ads purchased on Facebook and Google by entities believed to be linked to the Russian government’s attempt to influence the 2016 election.

While the legislation arrives in Congress with bipartisan support and a solid argument for passage, Silicon Valley firms are expected to use their increasing lobbying power to push back against one of the most significant efforts to regulate online content in the internet’s history.

Who introduced the legislation?

The legislation, known in the Senate as the Honest Ads Act, is being spearheaded by Sens. Mark Warner (D-Va.), Amy Klobuchar (D-Minn.), and John McCain (R-Ariz.). Reps. Derek Kilmer (D-Wash.) and Mike Coffman (R-Colo.) introduced a companion bill in the House.

What does the bill do?

The Honest Ads Act would effectively regulate online political ads with similar requirements imposed on television, newspaper, and radio ads by amending the Federal Election Campaign Act of 1971 to cover all digital advertising. It would require companies like Facebook and Google to better police their content to weed out foreign efforts to influence U.S. elections and to provide information about entities that purchase $500 or more in ads on a particular platform.

“First and foremost, this is an issue of national security—Russia attacked us and will continue to use different tactics to undermine our democracy and divide our country, including by purchasing disruptive online political ads. We have to secure our election systems and we have to do it now – the next election is only 383 days away,” Klobuchar said in a statement. “This bipartisan legislation would help protect our democracy by updating our laws to ensure that political ads sold online are covered by the same rules as TV or radio stations—and make them public so Americans can see who is trying to influence them.”

Why don’t internet companies already have to follow the same rules as TV, print, and radio?

The Federal Election Commission decided in 2006 that the internet was “a unique and evolving mode of mass communication and political speech that is distinct from other media in a manner that warrants a restrained regulatory approach.” As such, the FEC exempted online political activity from federal election laws.

At the time, the FEC ruling was seen as a major win for free speech. Now, more than a decade later, we’ve seen how the lack of regulation can result in widespread attempts at manipulation.

How is Silicon Valley responding to this?

They’re playing nice, at least on the surface—but it’s unlikely they support this legislation given the imposed burden it would place on them.

Twitter said in a statement, “we look forward to engaging with Congress and the FEC on these issues.” Google said it supports “efforts to improve transparency, enhance disclosures, and reduce foreign abuse.”

“We’re evaluating steps we can take on our own platforms and will work closely with lawmakers, the FEC, and the industry to explore the best solutions,” a Google spokesperson said.

Facebook echoed Google’s sentiments, with Erin Egan, the company’s vice president of U.S. public policy telling Gizmodo in a statement: “We stand with lawmakers in their effort to achieve transparency in political advertising. We have already announced the steps Facebook will take on our own and we look forward to continuing the conversation with lawmakers as we work toward a legislative solution.”

In an effort to stave off additional regulation, Facebook CEO Mark Zuckerberg announced last month that the company would impose new controls to “make it a lot harder” for nefarious entities to purchase ads on its platform. “Not only will you have to disclose which page paid for an ad, but we will also make it so you can visit an advertiser’s page and see the ads they’re currently running to any audience on Facebook,” Zuckerberg said.

Facebook has also begun banning pages that share fake news and recently began testing a new “context” tool to give readers greater information about the news they see on their feeds.

Does the legislation only apply to online political ads? What about fake news?

Ostensibly, the legislation will only address online political ads. Warner, the top Democrat on the Senate Intelligence Committee, told NPR that lawmakers attempted to impose a “very light touch” on internet companies through this legislation.

That said, we may see pushback from internet freedom activists and civil liberties groups regarding the impact the legislation may have on free speech. So far, however, the response from these sectors has been muted.

The Honest Ads Act will need to go through the legislative process. In the meantime, staff members from Facebook, Twitter, and Google have been invited to testify before the House and Senate intelligence committees on Nov. 1, where they’ll be asked to discuss exactly how they believe Russian operatives used their platforms in an attempt to disrupt the political process.

If you want to influence the process, you can call your representatives in Congress to express your support or opposition for the bill, which you can read in full below.