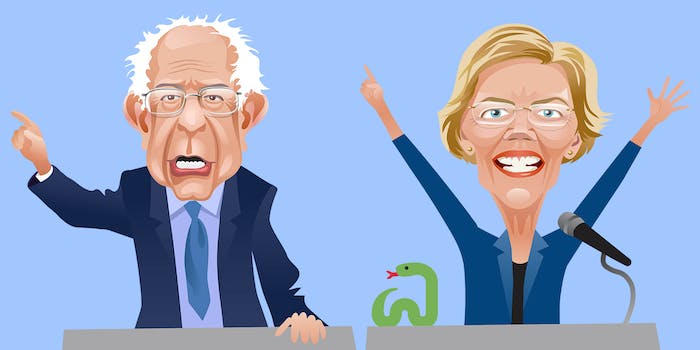 It seemed that last night, Sens. Elizabeth Warren (D-Mass.) and Bernie Sanders (I-Vt.) put to bed the drama that flared up Monday when CNN reported that Sanders told Warren he didn’t think a woman could win the presidency.

Sanders denied and reiterated his support of both Warren and Hillary Clinton in 2016, and Warren didn’t really challenge him on that denial, instead pivoting to how successful she and other woman candidates have been.

But after the debate, Current Affairs editor Nathan Robinson flagged some responses to a tweet Warren had said, noting the prevalence of the snake emoji in the replies.

While Robinson didn’t flag which tweet he was seeing responses to, there are definitely snake emoji in her replies from supporters of Sanders.

The snake is criticizing Warren (and her camp) for supposedly leaking the story to CNN about Sanders’ comments. While there’s no confirmation it came from her people, given that it was about a meeting between Sanders and Warren, and it seems unlikely Sanders would leak that story, it’s a logical conclusion.

Sanders’ supporters are thus livid and replying in-kind with an emoji.  But calling her a snake has revived accusation of sexism from Sanders supporters, a reboot of one of the predominant themes of the 2016 primary.

Supporters of Hillary Clinton felt they were unfairly targeted by supporters of Sanders and believed that toxic misogyny was what motivated those actions. Whether that’s true, the accusations stuck, and have been swift to be brought back, given the nature of the CNN story.

Are snakes sexist, though? Well, if you consult the bible, yes.

I mean, SNAKES?? The literal ORIGINAL symbol of why women can't be trusted??!

(And yes, women can also be sexist against other women, because sexist tropes are the toxic sludge we are all raised with.)

Calling a woman a snake for speaking up about casual misogyny definitely proves that your movement is rife with not so casual misogyny. https://t.co/45mVRpX9Al

this is legit embarrassing https://t.co/5vmVRGrZ9a

But the sexism of the snake emoji aside, the arguments have highlighted a fascinating concern about Twitter and its trending topics algorithm.

At the top of the site’s trending sidebar are the topics #NeverWarren and #WarrenIsaSnake.

But as noted by a number of reporters, the tweets flagged are predominantly criticizing those two hashtags. Essentially Twitter is highlighting what appears to be a large-scale movement of people who are anti-Warren when in reality it’s just that a lot of people are tweeting about it, or criticizing the anti-Warren narrative.

FASCINATING data here about #NeverWarren, the No. 1 trend in the United States right now.

The top three tweets about the hashtag in the world⁠—⁠from @johnpavlovitz, @mehdirhasan, @deetwocents⁠—all denounce people using it.

The algorithm is generating an opposite reality. pic.twitter.com/lAOyiS5S7G

8 out of the top 10 traffic generators to this hashtag are people decrying it. Twitter trends do not equal reality, folks. The nonexistent “Vince Vaughn backlash” is going to play out in a different way every single day until the election. https://t.co/15bqikGrGf

The Twitter trending topics have been accused of being misleading throughout the 2020 primary, most frequently over spats between Sen. Kamala Harris (D-Calif.) and Rep. Tulsi Gabbard (D-Hawaii), as supporters and detractors have been able to push hashtags that have wound up being highlighted by Twitter.

That, too, has led to frequent accusations of Russian bot interference in the hashtags, without a real assertion of what that is or means.

“Never Warren” this morning got similar claims of being part of Russian interference, though reports are unsubstantiated.