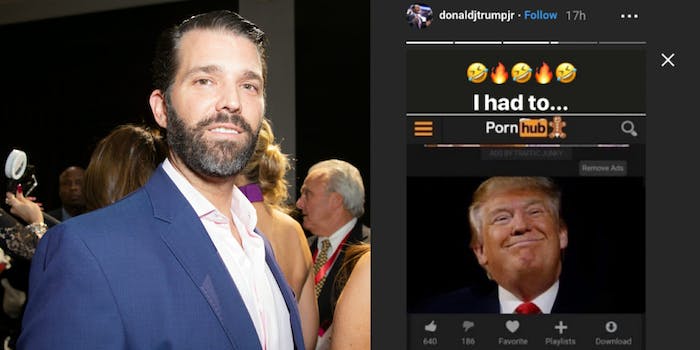 Today, Trump Jr. took to Instagram—his favored platform for strange and off-beat shares—to deride Democrats. In a post added to his story last night, Trump Jr. shared a Pornhub-style meme of his father with the caption “I had to…”

The image shows President Trump smirking on a video titled “Orange Man Fucks Entire Democratic Party.” The meme is likely in response to the recent conclusion of the Russia investigation, which ended without a collusion charge.

The questionable meme follows Trump Jr.’s trend of sharing consistently criticized posts. On Tuesday, Trump Jr. also shared a spoof March Madness bracket from the New York Post. The bracket called out members of the media who’ve been critical of the president, particularly as the Russia investigation developed.

Did you fill out your Mueller Madness Bracket yet? Here’s mine. It was a toss up with all the losers to choose from but it came down to Maddow VS Avenatti and while that could have gone either way he got bonus points for getting arrested. Let me know your thoughts… Who else do you think belongs in here? #mueller #madness #brackets #march #marchmadness

In early January, Trump Jr. posted another questionable meme about his father. That time, it referenced comments from Rep. Rashida Tlaib (D-Mich.) who months ago said Democrats were “going to go in and impeach the motherfucker.”

Wish some of these Anti-American liberal activist reps would do a little more fighting for the people of THIS country and THEIR constituents for a change. I know that’s what @realdonaldtrump is Actually doing. He is fighting for America and Americans for their jobs, for their families,and for their wellbeing. From Fortune Mag: Ford Cancels a $1.6 Billion Mexico Plant and Adds 700 Jobs in Michigan http://fortune.com/2017/01/03/ford-cancels-mexico-plant-trump/