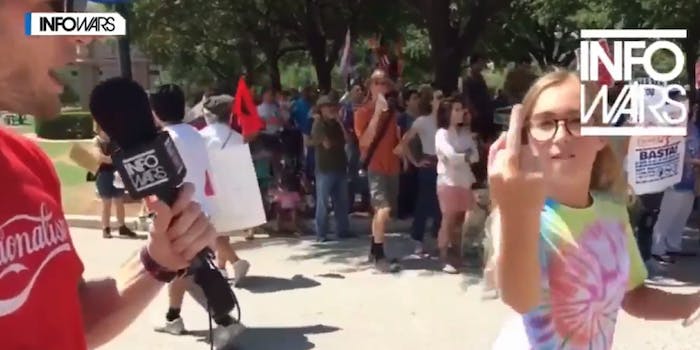 Who hasn't wanted to say that?

The internet can be a cruel, horrible place sometimes. But once in awhile, there is a moment of pure perfection that crystallizes exactly what you’ve wanted to say: like in this instance, where a little kid tells an InfoWars reporter that he’s a “fucking idiot.”

A video surfaced online on Wednesday of an InfoWars so-called reporter, doing one of their infamous man-on-the-street interviews, approaching a child.

When the interviewer approaches her and shoves the logo-emblazoned cube mic in her face and asks her “How are you young man?” things get hilarious.

After pausing for a second, she says the words many people have wanted to tell InfoWars: “You’re a fucking idiot.”

Kids telling Infowars they're fucking idiots is my favorite kind of content pic.twitter.com/dRneam1BWm

Taken aback, the interviewer asks, “Wow, who taught you that language?”

To which she replies, “my mother” before flipping off both the camera operator and interviewer and storming away in glory. The mic-holding man seems utterly flabbergasted, repeatedly saying “Oh, my gosh.”

Given all of the crazy, incorrect, and xenophobic things that are produced on InfoWars (not to mention pushing conspiracy theories about the Sandy Hook shooting), it seems odd to think “fucking idiot” is the moral line they get offended at, but it is what it is.

It’s pretty impossible to tell if the video is an InfoWars-created hoax or a genuinely authentic reaction from a media-savvy child. But if the video isn’t a hoax, it’s probably safe to say that the upcoming generation of children is going to save the world.

People on Twitter loved her blunt reaction to being interviewed by InfoWars.

if my future child doesn't talk to @infowars like this ive failed as a parent https://t.co/GhrsreFu3b

I guess Infowars assholes don't like the truth. https://t.co/PCcuhEwNGZ

And the #Infowars snowflake is upset with her language 😂🤣😂🤣 https://t.co/zRR1MaS3JQ

As soon as this girl is old enough I want to vote for her. #Infowars #Idiots #LordsNameInVain https://t.co/ARpQTlanIx