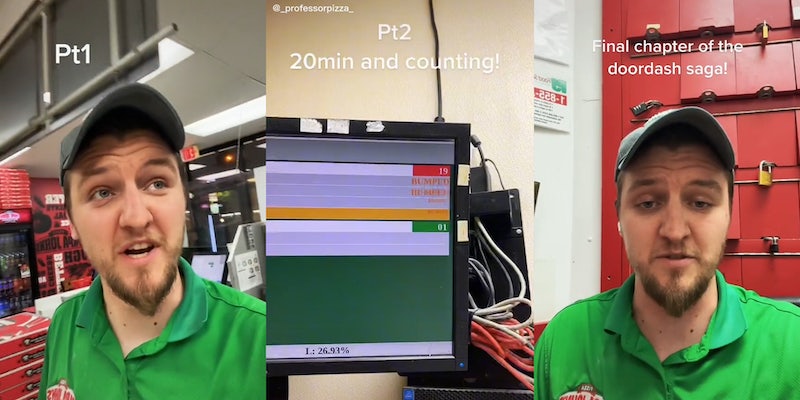 “Let’s play a game called ‘How long until DoorDash gets here'”: Papa John’s worker chronicles the wait for $70 order with no tip to be picked up, sparking debate

'I wonder how long it’s going to sit.'

Stories of a pervasive “no tip no trip” DoorDash philosophy continue to dominate TikTok. In the most recent incident to go viral, a Papa John’s employee (@_professorpizza_) documented just how long it took for a $70 DoorDash order with no tip to be picked up.

Part one of the series currently has over 2.4 million views.

In the first part, the Papa John’s employee explains that the store he works at received the order but that the store’s driver was busy with other orders and could not take it. Knowing this, the employee sent the order to DoorDash.

“Since dashers are going to see that they did not leave a tip on this large order, I wonder how long it’s going to sit,” the employee asks.

After 20 minutes, the employee posted an update. “It’s been almost 20 minutes now since I’ve given [the order] to a dasher, and still one has not been assigned,” he shares.

Eventually, he says a dasher did come after 10 more minutes. However, he says they did not have a “hot bag,” a bag designed to keep orders warm during delivery. As a result, the employee says he rejected the dasher, which he claimed in a later video was due to both taking pride in his work and his knowledge that a lack of a hot bag would result in an unhappy customer, who may then ask for a refund.

He says a second dasher then arrived and that he also didn’t have a hot bag. He says he turned that dasher away, too.

After an hour, he says the customer came and picked up the order themselves. The employee claims he also apologized and refunded the delivery fee.

Throughout this saga, many users on TikTok were critical of the employee’s methods. First, some said it was irresponsible of him to pass the order to DoorDash in the first place.

“If she ordered it through the pizza place it should be delivered,” a commenter wrote. “This is them not doing their job!”

“If they didn’t place the order through DoorDash it’s your responsibility as an owner to take care of your customer,” a second agreed.

“Dam remember when you ordered delivery and it was their job to deliver it,” a third stated.

Others claimed that it was possible the customer planned on tipping in cash.

“Are you new to pizza? We tip when you get here,” a user wrote.

“Some people tip in cash wake up,” a second added.

However, alleged DoorDash drivers in comments refuted this idea.

“I have over 2.2k deliveries under my belt for DoorDash. I have received a total of 3 cash tips since I’ve started,” a commenter alleged.

“Half the comments are ‘I always tip in cash’, yet less than 1% of my deliveries tip in cash,” a second commenter added.

One user wrote under the original video, “It blows my mind that people think anyone would actually take an order that’s 15 miles for $3. That makes no sense. it’s not charity work.”

Many users claimed that a job should not be dependent on tips to receive service.

“All of this could be avoided if tipping was outcasted like it is everywhere else in the world and we forced companies to pay at least min wage,” a commenter said.

Update 11:30am CT, May 11: When reached for comment, DoorDash told the Daily Dot in a statement: “We’re proud that so many Dashers are able to earn when, where, and for however long they want by connecting customers with local businesses. Nationally, on average, Dashers earn over $25 per hour they’re on a delivery, including 100% of tips, and work fewer than four hours a week. Dashers are always shown a guaranteed minimum amount they will earn for completing a delivery before they even accept the delivery, as well as the location and name of the restaurant, and estimated total mileage for the delivery so that they can make the best decision for themselves while dashing. We’re always eager to hear feedback from any Dasher, customer, or merchant as we work to continue providing value to our community.”

The Daily Dot reached out to @_professorpizza_ via TikTok comment.