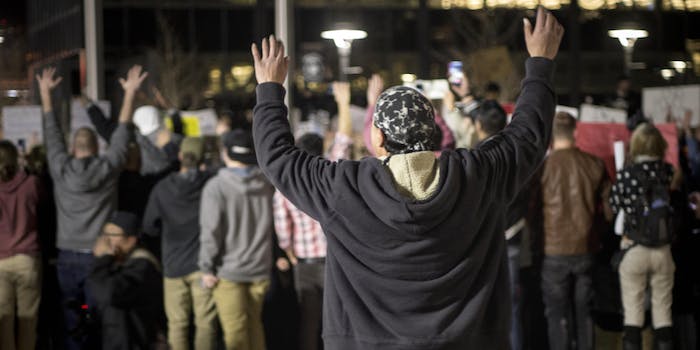 Someone on the NYPD scanner said to shoot protesters. But was it a cop?

People are trying to figure out whether it was a police officer or a civilian posing as a cop.

Tension continues to mount in the standoff between police and protesters all over the country.

Protesters, showing up in droves to demand justice for George Floyd, have been gathering in the streets, and police standoffs have turned violent in several instances. Videos of these occurrences are adding fuel to protesters’ fire, as the very act they are standing against—police brutality—is repeatedly used against them.

So when reports began to spread that someone with the New York Police Department urged police via police scanner to shoot and run over the protesters, many immediately believed them to be true. However, investigators are unsure if the voice heard on the police scanner was a cop.

The audio, which was independently confirmed by TMZ, revealed voices urging police to “shoot those motherf*ckers” and “run them over.” The origin of the audio has not been confirmed, sparking questions about whether it was truly NYPD officers speaking or a civilian with a stolen radio.

With waves of footage continuing to reveal aggressive and violent police response to protesters, statements like this are particularly concerning. Regardless of whether the voice came from an officer or civilian, the overheard statements pose a real danger to protesters.

Police told TMZ they are aware of the comments and are currently investigating. The NYPD also noted that several police scanners have been lost or stolen over the course of the protests. It is possible, the police said, that the statements were made by a civilian posing as an officer.