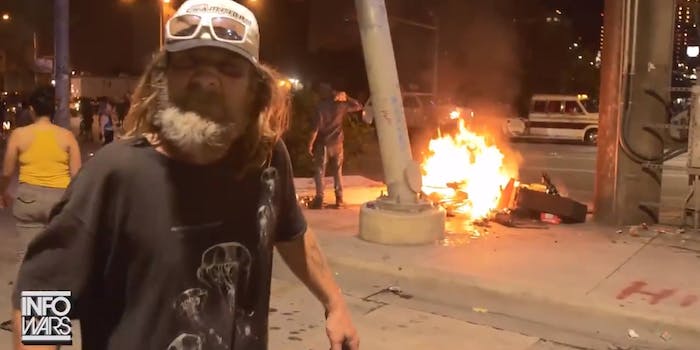 Debate about the video rages online.

An Infowars video shows a homeless man’s possessions being set on fire during the weekend’s George Floyd protests—but who actually set them on fire?

Many viewers are skeptical about the incident, especially as the homeless Austin, Texas man in question approaches and shouts at the Infowars cameraman after his mattress is burned. The incident occurred under the I-35 bridge downtown.

Opinions are divided on who exactly is to blame but a lot of Twitter users believe Infowars carried out the attack in order to demonize the protesters.

“This InfoWars crap is being led by the Kremlin, with the goal of tarnishing legitimate protesters. These extreme-right instigators are despicable bastards with no shame,” tweeted Jon Cooper, Biden surrogate and former Obama Long Island campaign chair.

Some have suggested the entire thing is staged, with the homeless man a paid actor. However Pro Publica reporter Jessica Huseman has confirmed that he is a real person, called Cale, and he lives in front of her building. She went on to claim via Twitter that despite the video coming from Infowars the incident happened as depicted, though she doesn’t specify who the perpetrators were.

“Thank you to the people who were concerned about Cale. Someone has mailed a mattress, which I will deliver to him. You are all very kind,” she wrote in a follow-up tweet.

Debate on whether or not one of the men in the video is actually wearing an Infowars hat, and whether or not that means he’s part of the Infowars crew, rages on Twitter. It all became a national trending topic Monday morning.

Others blame white supremacists using the protests as an excuse to attack vulnerable people and otherwise engage in violence. Others blame leftist protest groups.

The Daily Dot has not been able to independently verify who set fire to the man’s mattress. Watch the video below.