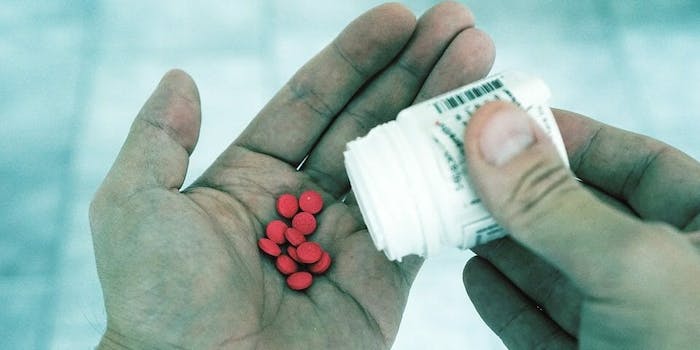 Why isn’t a male birth control pill available yet?

A hormone cocktail for men might be closer than you think.

Women have been obligated to bear the cost and convenience burden that is birth control for 60 years. The Food and Drug Administration approved the pill in 1957, a moment that proved at once liberating and frustrating for women who wanted to have sex—if not necessarily children—and who wanted some say in their family planning. While women’s sexual freedom has traditionally come with a price tag, prescriptions, and planning, men’s simply hasn’t. It’s especially annoying when you consider the bountiful possibilities that exist within the realm of male birth control. To put it simply, this is certainly a burden that could be shared.

Headlines hinting at the arrival of male birth control have piled up over the years without an actual product ever hitting pharmacy shelves. “The joke in the field is that the male contraceptive has been five years away for the last 40 years,” John Amory, a research physician at the University of Washington School of Medicine who’s been attempting to crack the male birth control market for decades now, told Bloomberg.

The science is there—or getting there—and the consumer interest is already there. According to data published in the Journal of Human Reproduction, more than half of U.S. men surveyed would take a male contraceptive. So why don’t we have more options in male birth control?

Everything you need to know about male birth control

How does male birth control work?

Currently, men who would like to take responsibility for their own semen have two options. There are condoms, the cost of which adds up and the feel of which irks some people regardless of their genitalia, or a vasectomy, the male sterilization surgery achieved by snipping the vas deferens so that sperm can’t enter the ejaculate. Vasectomies can top $1,000 and they’re nearly never reversible, so, certainly not the obvious choice for everyone.

When we talk about male birth control, we are talking about contraceptives intended to block or immobilize or render otherwise ineffective the sperm in semen. There are a number of ways to do this without snipping any male organs.

What are some (future) male birth control options?

There isn’t a once-daily pill equivalent for men just yet, but researchers are getting close. In 2018, a new male birth control pill—called dimethandrolone undecanoate, or DMAU—showed promise in a number of studies as a daily pill option for men. DMAU combines an androgen (a male hormone) like testosterone and a progestin, the same ingredient found in women’s birth control pills.

The most well-known male birth control option, Vasalgel, is making progress alongside its cousin, RISUG, which is currently being researched in India. When injected into the vas deferens, the gel acts as a sort of sieve separating sperm from semen so that the penis, well, shoots blanks. It’s like a vasectomy, but without the scalpel. Vasalgel has proved effective in monkeys but hasn’t yet been tested on humans. Still, the idea is that it would provide a long-acting, reversible contraceptive option, comparable to the cost-effective IUDs and implants available to women.

Less widely discussed is the herbal supplement Gendarussa, which messes with the enzyme on a sperm’s head so that the sperm can’t penetrate the egg. The lead researcher behind Gendarussa, Bambang Prajogo, told USA Today that his pill boasted a 99 percent efficacy rate. While it’s still under testing in Indonesia, it looks promising. Across three test groups containing nearly 300 men, Gendarussa seemed to prevent pregnancy in all but three cases.

Stopping sperm from swimming could also prove an effective contraceptive method. Eppin Pharma, for example, is developing a compound that would bind to enzymes on the sperm’s surface and prevent it from penetrating the egg. And indeed, research suggests that sperm-specific proteins could provide a useful target for contraceptives that hinder little swimmers’ ability to move.

Why is male birth control so complicated?

You might be wondering why scientists can’t cook up a hormone cocktail like the pill and call it a day. According to David Sokal, chair and director of the Male Contraceptive Initiative, male physiology makes that fairly difficult. While small doses of hormones can block ovulation, the male body would have to be flooded with hormones before the testes would stop producing sperm. In a conversation with Mic, Sokal pointed out that attempts had been made, but the high doses of testosterone doled out to study participants caused many of them to break out and gain weight. Naturally, they weren’t jazzed about such side effects.

The idea that men can’t handle the side effects that many women on hormonal birth control put up with every day has grabbed headlines all across the internet. In 2016, news broke that a World Health Organization-commissioned clinical trial for a hormonal contraceptive shot screeched to a halt as weight gain, acne, mood swings, and depression prompted male participants to drop out. The news was somewhat sensationalized—the guys who stuck around were largely amenable to using the product, but the trial was ultimately called off after one participant attempted suicide. (It’s worth noting that in testing the pill in the 1950s, women also died.)

The 2016 trial wasn’t the only male birth control shot ever tested, though. The National Institute of Health is working on a long-acting injectable androgen shot, currently in its first phase of clinical trials. Researchers seem optimistic about their product.

“I’m very hopeful,” Min Lee, a chemist with the NIH who is working on the trial, told the Daily Dot. “I’m hopeful that I will see a male contraceptive in my lifetime at least.”

Part of the reason it’s taking so long to introduce a viable form of male birth control, Lee explained, is the molasses-slow speed at which drug approval moves.

“It’s the drug industry, and it really takes a long time for anything to go through from beginning to end, from bench to bedside,” Lee said. Many medications take over 15 years to develop, he added, and the process typically stretches longer yet for products intended for a healthy audience, especially when they’re multiple-event doses—like contraception. The safety bar is simply higher than if the drug in question were a cancer drug required to treat a patient ASAP.

But according to Sokal and the Male Contraceptive Initiative’s executive director, Aaron Hamlin, approval time isn’t the only variable. It costs a ton of money to get a drug to market, and male contraceptive researchers aren’t given the resources they need. When pharmaceutical funding goes to contraceptives, it goes to female contraceptives, where a proven market already exists. Profits are more or less guaranteed. Which is to say the pharmaceutical industry will happily let women foot the bill if it allows them to avoid cannibalizing profits.

Really, though, the largest barrier to male birth control seems to be funding. Lee hopes raising awareness will help researchers get more.

“We just want to get word out that we’re working on it and the impetus is there,” Lee said. “If more people are aware of it and more interested, potentially there would be more funding for us to work with. I think everything is possible for us.”