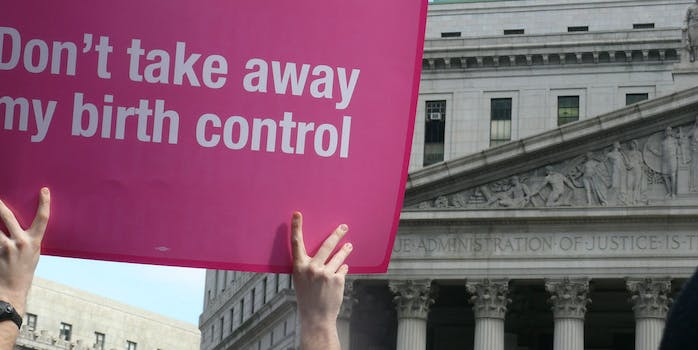 How does federal funding for Planned Parenthood actually work?

For starters, it never ever pays for abortions.

“Defund Planned Parenthood” has gained traction as a political rallying cry for the GOP over the past decade. And now that they control Congress and the White House, Republican leaders are eager to finally make good on their promise.

Their latest attempt comes in the form of a provision tucked into the American Health Care Act repeal bill that would block Planned Parenthood health centers from receiving Medicaid reimbursements. To understand what it would mean for this legislation to pass, it’s critical to understand how federal funding for Planned Parenthood currently works.

Planned Parenthood receives federal funding, but not in the ways you might think.

Planned Parenthood currently gets about half of its funding from government sources, but the process doesn’t involve handing over blank checks with “use this for free abortions” written on the memo line. In reality, Planned Parenthood receives federal funds in two ways that are neither scandalous or glamorous: Title X grants and Medicaid reimbursements. None of this money goes toward abortion care, but more on that later.

Title X, known as the “National Family Planning Program,” was enacted in 1970 to make family planning services accessible to all. Title X grants allow health centers around the country to provide birth control, STD testing, gynecological exams, and cancer screenings to people who wouldn’t otherwise be able to afford it. More than 1 million Title X recipients get their care at Planned Parenthood. According to Title X’s annual report, in 2015, over half of those patients identified as people of color. Many of them live in areas where Planned Parenthood is the only viable source of birth control and reproductive care.

Political beliefs aside, the success of Title X is undeniable: Each year, the program helps prevent more than 1 million unintended pregnancies, 400,000 abortions, 53,000 chlamydia infections, and over 1,000 cervical cancer deaths. It also makes fiscal sense: For every dollar invested in Title X, taxpayers save a little over $7 in public health costs; in 2010, that savings amounted to over $7 billion.

The majority of Planned Parenthood funding comes in the form of Medicaid reimbursements.

Planned Parenthood is a healthcare provider, so when we talk about the Medicaid reimbursements it receives, we’re talking about the exact same billing process used by any Medicaid-enrolled clinic around the country.

When a Medicaid patient goes to a Planned Parenthood clinic for care, the clinic then submits a claim to Medicaid for a reimbursement, the same way it would bill any insurance provider. The federal government then reimburses state Medicaid agencies for 90 percent of family planning costs. These routine reimbursements are the form in which Planned Parenthood receives 75 percent of its so-called government funding, or about $390 million annually (the rest, about $60 million, comes from Title X).

The current defunding effort aims to make Planned Parenthood clinics ineligible for Medicaid reimbursements. Republican leaders claim their motivation is to stop abortion, but a law limiting clinic choices for Medicaid patients would not only be incredibly difficult to defend in court, it would have no effect on the number of abortions Planned Parenthood provides. Why? Because no federal money is used for abortion services.

Again, not one cent of federal money pays for abortions.

So what would “defunding” Planned Parenthood actually do?

Much more important than what will be affected by a Planned Parenthood funding freeze is who. The answer to that question is in the statistics: Roughly half of Medicaid recipients under 65 are racial and ethnic minorities. Ninety percent of Title X recipients are women. Cutting reimbursements to Planned Parenthood would cut off access to crucial medical care for low-income women and people of color, vulnerable populations that already face “more barriers to care, a greater incidence of chronic disease, lower quality of care and higher mortality than the general population,” according to the Center for Health Care Strategies.

In addition, more than half of Planned Parenthood’s health centers are located in communities that don’t have many (or any) other options for basic healthcare and family planning. Research has shown that if Medicaid patients are forced to go elsewhere, many of them won’t have anywhere else to go.

Even if the goal of this legislation was solely to cut government spending, a Congressional Budget Office report found that blocking federal funds from Planned Parenthood would lead to thousands more births and increased federal spending by $130 million. Which is why reproductive justice advocates say that government’s “funding” of Planned Parenthood is a misnomer, and that instead it’s a smart investment.