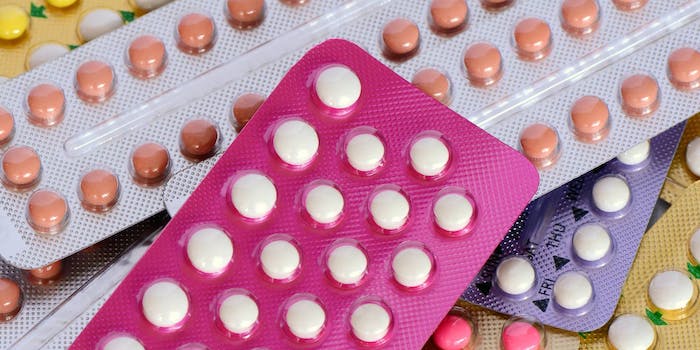 The men's study was halted over the same risks women have long endured.

A recent clinical study about an injectable hormonal birth control for men has launched a thousand thinkpieces on sexism, double standards, and the ways in which we only take things seriously when men complain about them. The study, released in the Journal of Clinical Endocrinology and Metabolism (JCEM), showed that the male birth control was 95 percent effective, but included some worrying side effects—side effects women have been complaining about since the pill was first tested.

“The most common adverse events were acne, injection site pain, increased libido, and mood disorder,” wrote the authors of the men’s study. And though they concluded the birth control would have similar efficacy rates as that of oral contraceptives for women, the study cites adverse effects as well, with some groups of men experiencing “unusually high” mood disorders. Because of that, two independent safety committees decided to terminate the study early.

A quick search for any hormonal birth control (let’s take Junel FE, the one I’m on) includes similar side effects, like anxiety, depression, weight gain, nausea, and breast tenderness. It’s because of these similarities that so many women are angry, and feel that the chance at widely available birth control for men was thwarted. There are cries of “suck it up” and accusations of men being “little bitches” because they complained about things women have endured for decades.

The trial was halted for seemingly good reasons, and we should always protect the safety of trial subjects. However, looking at the original trials for oral contraceptives from the 1950s, women were not afforded that same benefit.

Gregory Pincus and John Rock are largely credited as the innovators behind oral contraceptives. They began tests in 1954 of synthetic progesterone, including on women who had not given their consent to be used as subjects. One trial “forced hospitalized schizophrenics to participate in an experiment whose long-term side effects were unknown.”

In 1956, the duo conducted large clinical trials in Puerto Rico to avoid America’s harsher anti-birth control laws—and in a move many consider fed into colonialist, classist attitudes about the subjects (and, again, involved questionable practices of informed consent). Though Enovid, the brand name for synthetic progesterone, was found to be 100 percent effective, a female doctor, Dr. Rice-Wray, working on the trials said it caused “too many side reactions to be generally acceptable.” She was ignored.

In 1961, a paper on the clinical trials of oral contraceptives said the cultural gains far outweighed the side effects. “Many patients have expressed themselves as being absolutely delighted with the freedom from contraceptive measures related to coital acts, of being more confident and relaxed at intercourse.” (Presumably, these freedoms would not be taken into account during the recent men’s trial, as the ability to have sex without the risk of pregnancy is something men are used to, since women are the ones who get pregnant and are often tasked with birth control.) The paper did acknowledge side effects like nausea, breakthrough bleeding, and libido changes. In the trials they covered, nine women discontinued the contraceptives because of the side effects like .

These studies certainly sound familiar to the men’s trial, though many men also pointed to one specific troubling point: death. According to the JCEM study, one man killed himself during the trial. It’s an awful fact, and one that should certainly be taken into account when considering further trials. But yet again, it appears women have not been afforded the same sympathy or concern.

During the Puerto Rico trials of the 1950s, at least two women died while taking Enovid (PBS reports it was three). However, no assessment was done regarding their deaths’ relation to the study. “No autopsies were done to determine what caused their deaths,” despite circumstantial evidence that their deaths may have been caused by blood clots and linked to Enovid. In fact, women have continued to die from oral contraceptives due to its risk of blood clots and stroke.

Women are expected to risk depression, mood swings, libido changes, and death for the sake of having sex. Either men should share that burden, or we should all wait until better birth control comes along.