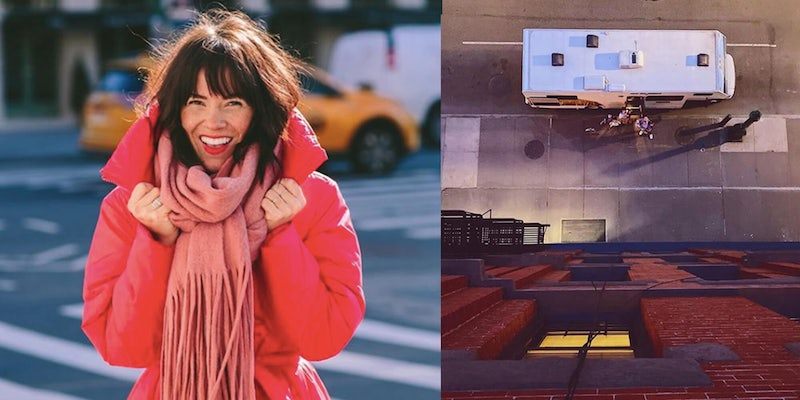 She and her family fled New York City despite the city's high infection rate.

An influencer is facing some serious backlash after deciding the worldwide coronavirus pandemic would be the best time to embark upon a cross-country family road trip.

Naomi Davis, better known online as Taza, is a family and lifestyle influencer based out of New York City. She runs a blog about her husband and five kids called Love Taza and makes a living sharing snippets of her life on an Instagram account that boasts almost 500,000 followers.

NYC has become the biggest hotbed of COVID-19 in the United States, with over 36,000 cases confirmed so far. Despite New York governor Andrew Cuomo ordering all non-essential businesses to close and calling for residents to stay home as much as possible starting on March 22, Davis took to Instagram nearly a week later to announce that her family had rented an RV to set out on an adventure outside of their apartment.

“My heart is breaking for what is happening in New York where I live and around the world right now,” she wrote. “And after two full weeks in the apartment, we made the family decision to drive out west so we can have a little more space (namely some outdoor space for the kids) for a little while.”

While it’s completely understandable that the influencer does not want to be cooped up in a small apartment for the foreseeable future, it’s also something many, many, many people across the country and the world are doing right now, as we all attempt to slow the spread of the novel coronavirus, rather than risk tracking it across the country.

The devastating outbreak across Italy was made worse when thousands of people fled Northern Italy after plans to impose a quarantine on the region leaked early. As a result, some of them brought COVID-19 with them to other parts of the country, possibly increasing the spread of the contagion in a way that could have otherwise been contained.

As such, the Centers for Disease Control and Prevention (CDC) issued an advisory on Saturday night requesting that residents of New York, New Jersey, and Connecticut refrain from traveling if at all possible over the next 14 days. But many New Yorkers, like Taza, had already fled the city in advance of the order.

And while some of Davis’ followers commended the influencer for getting her children out of New York before the coronavirus order came through, many more were quick to condemn her actions.

“Potentially spreading COVID further by traveling is not brave,” wrote @mpanutso. “I fully understand the decision, but it’s not brave.”

Another Instagram user, @julesgozdziewski, explained why this choice is so troublesome: “If everyone makes the decision to leave New York City, other states’ healthcare systems are quickly going to be overburdened by the number of cases, just as New York’s is now.”

“As difficult as it might be to not have more open space, I really, REALLY struggle to believe [that it’s] worth spreading this virus,” she continued. “I hope other people are actually willing to listen to what our government is asking of us and make decisions that consider the wellbeing of others rather than only themselves.”

The outcry on Twitter was similar, with people livid that someone would not only be so selfish but also use their platform to not discourage others from acting with similar disregard for the rest of humanity.

Taza and her family clearly understand some of the risks associated with traveling during this time—she shared in her initial post that she wants to “make sure we still stay away from others during our trip,” acknowledging that you can be asymptomatic and still carry/pass on the virus.

But it is essentially impossible to completely avoid interactions with humans no matter what your living circumstances are, but especially when you’re traveling across the country. Even with an RV, the family will constantly have to stop for gas and food. The family could travel through multiple states while potentially bringing COVID-19 along with them without even knowing it.

As of now, Davis is currently continuing to update her followers on their trip via Instagram Stories and defending the decision to take her family on an adventure. One can only hope the influencer’s fun family trip doesn’t ultimately leave a trail of coronavirus behind them.