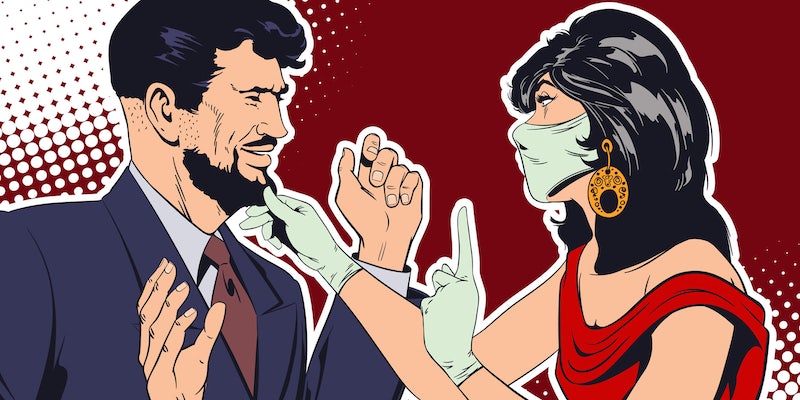 As cases of the coronavirus increase daily, the world is changing. Grocery shopping in-store is being replaced with food delivery services online, movie nights are taking place in the living room instead of the cinema, and dates are happening over video calls rather than drinks at a dive bar.

Under quarantine, cuffing season—informally recognized during the fall and winter when the holiday social calendar seemingly leads to an annual spike in couples—has been extended until further notice. And from “FaceTime and chill” to Zoom group dates to flirting with someone across the country, singles are in.

‘No matter where we are, we can instantly connect’

When Bobby Vasilev, a 21-year-old photographer and videographer in London, randomly met Taliya six months ago at a park, the two exchanged contact information but lost touch shortly after. A few months later, the couple began talking again, but once they made plans to go on a date, social distancing became a state-wide recommendation. Instead, Taliya suggested they spend their first date FaceTiming. Lasting about an hour, the date consisted of ordering food from the same restaurant through Uber Eats, chatting about the changes happening with the coronavirus, lighting a candle, and of course, flirting. “I think dating over FaceTime is quite interesting,” Vasilev tells the Daily Dot. “The pro is that no matter where we are, we can instantly connect, but I don’t think it’ll ever beat dating in real life. For the time and circumstances we’re in, it’s a good way to date, but I’d much prefer meeting the person IRL.”

Priscilla McGregor-Kerr’s date also had a similar idea. When the 25-year-old marketing consultant expressed to the guy she’s talking to that she wanted to have a glass of wine, but not alone, he transferred 15 euros to her bank account to buy a bottle of wine to enjoy over a FaceTime date. The date lasted roughly three hours and the couple played drinking games and watched a show together. “We have one arranged for next week,” an optimistic McGregor-Kerr says. “We’re going to order from the same restaurant through Deliveroo to make it feel like we’re at the same place.”

It would be valid to assume that dating apps would see a decrease in usage during the time of social distancing, but they’re still being used at a steady rate. In a survey on March 17, Coffee Meets Bagel users reported that 78% of them are putting a pause on in-person dates but 51% are still spending the same amount of time on dating apps. After a few days of messaging the same person with nothing new to report about your day (from being stuck indoors), it would make sense to take the connection off the app, and that’s exactly what users are doing: 39% reported that they plan to text their matches more, 29% plan to call more, and 28% plan to video chat.

Dr. Michael Brustein, a psychologist in New York City, isn’t shocked by the behavior of singles who are seeking love without definite plans to meet up. “People are trying to compensate for the lack of connection during this time. So the drive to make a connection, be heard, noticed, and observed, is even more heightened right now,” he says. Brustein believes that people are adaptive and can have an intimate connection with someone communicating digitally or through video chat, the same way he has with his patients through online sessions. He attributes the lack of immediate affirmation from a social environment, like someone noticing you in passing, to wanting to connect with strangers on dating apps. “People are lonely right now. If you’re living alone and you’re isolated from friends and your daily routine, it becomes more prominent to seek a connection with someone.”

With barriers to progressing a romantic connection in mind, dating apps are adapting as well. Coffee Meets Bagel made changes in its interface and implemented new initiatives to expand options for singles. Originally an app with a seven-day expiration date on conversations, to push matches to meet up in-person, Coffee Meets Bagel removed the expiration date from all chats last week.

“We think people are actually going to take the time to really get to know someone more, which is actually great for the connection itself,” says Dawoon Kang, founder of the dating app. Additionally, the app is using Zoom to hold virtual group meetings for singles in groups of 7-10 in the same area. Kang introduced the community option to increase support and socializing among singles during a time of stress and uncertainty. “I think this is a good step while things feel scary and overwhelming. So people will know ‘I don’t have to be totally isolated and I can continue to connect with other people,’” Kang says. If two people spark interest in each other during the meeting, CMB will connect them after the event.

Another dating app that is working to increase connections at this time of self-isolation is Tinder. Beginning next week, the dating app will allow users to swipe anywhere around the world through the Passport feature, for free. The popular feature, which originally is included in the Tinder Plus and Gold subscriptions, will be free until April 30.

“Our hope is that our members can use the Passport feature to transport themselves out of self-quarantine to anywhere in the world. They can check in on folks in their hometown, college town, or sister city, and find those across the world who are going through the same things,” reads the company’s statement on the update. Additionally, Tinder U users in the U.S. can now swipe in any radius, a feature that previously only worked with a range close to their specific college campus.

Lull Mengesha, 36, is using Tinder to his advantage during this time of social distancing. After matching and chatting with someone for a few minutes, he suggested setting up a FaceTime date for the following day. While Mengesha says the 45-minutes date didn’t end well, he’s confident about future FaceTime dates, thanks to dating apps. “I’m sure I’ll go on another one. It’s kind of a strange place to be in right now,” Mengesha tells me. “Assuming we have another couple months ahead of us in isolation, people are going to seek intimacy digitally but also knowing that it might not manifest into anything should be the expectation people have.”