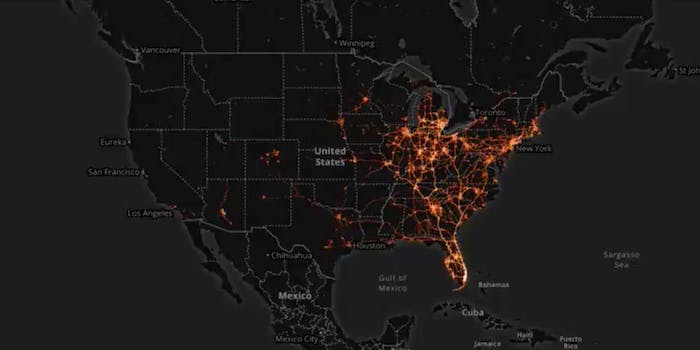 Want to know where all those Florida spring breakers are now?

A heat map highlighting cellphone location data within the U.S. is providing a frightening insight into the movements of humans amid the ongoing coronavirus pandemic.

The data, collected by location technology company X-Mode, was recently plugged into the geospatial data visualization platform known as Tectonix as part of an effort to track the coronavirus across the globe.

In just one example of the project’s findings, cellphones on a beach in Fort Lauderdale, Florida, during spring break were selected and tracked. When the festivities ended, the cellphones were seen sprawling out across the Eastern half of the country, potentially bringing cases of the highly contagious virus with them.

X-Mode states that the data used is “anonymized,” meaning a cellphone’s location is not linked to its user’s identity. Tectonix took that raw data and honed in specifically on devices moving between 3 and 10 miles per hour in an attempt to pinpoint cellphone owners believed to be walking or traveling with bikes or scooters.

Aside from Florida, the project has also released its analysis of New York City, which is currently the epicenter of the pandemic in the U.S. Just like Florida, the data on New York, specifically Manhattan, shows widespread movement throughout the month of March.

Following New York Gov. Andrew Cuomo’s issuance of a stay-at-home order last week, cellphones in the area were seen moving across not only the entire country but throughout the world.

X-Mode and Tectonix have also released data relating to Rome and Seattle. In the case of Rome, an 80% drop in what is described as “normal” social patterns were witnessed between Feb. 15 and March 18.

While movement in Seattle saw a decline from Feb. 16 to March 15, X-Mode notes that “the drop has not been nearly as drastic” as what was witnessed in Italy.

The project showcases both the importance of social distancing and just how significant the digital breadcrumbs we leave behind are. X-Mode states that its “data is aggregated at the advertising ID level and associated to the device and not a physical person.”

An advertising ID is assigned to devices and allows companies to tailor specific content to users based on their browsing history and activity.

“We never collect, handle, or store personally identifiable information (PII), such as your name, phone number, email, date of birth, or gender,” the company’s site states.

Such data is gathered from electronics like cellphones and the Internet of Things (IoT) devices as well. Most users have, often unknowingly, opted-in to having their data gathered for advertising purposes.

And while X-Mode and many other companies in the industry point to the fact their data is anonymized, researchers have found that such data can easily be linked to its owner’s identity. Researchers from two universities in Europe said in 2019 they were able to re-identify 99.98% of individuals in anonymized data sets based only on 15 demographic attributes.

X-Mode adds on its site that it is compliant with both the EU’s GDPR and California’s CCPA privacy laws. Users are also offered the ability to opt-out of having their data used by X-Mode as well.

The two companies’ project comes less than two weeks after it was reported that the federal government was seeking access to anonymized location data from major tech companies in order to track the virus. Two U.S. officials speaking with the Washington Post said the data could “help epidemiologists spot trends, including vulnerable populations, or identify areas at risk, such as hospitals under strain.”

The U.S. now has more confirmed cases of COVID-19 than any other country, including China. As of Thursday, more than 81,000 people have been infected with over 1,000 deaths as a result.