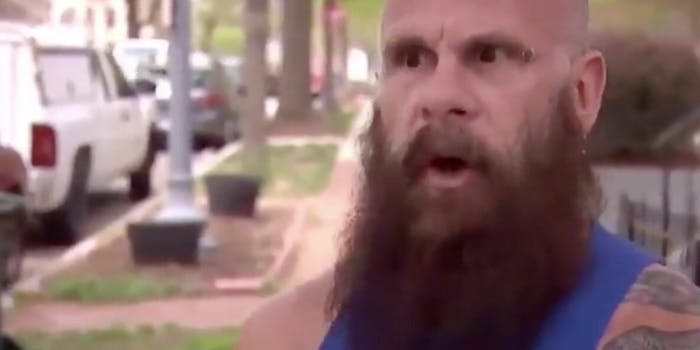 A white man has been caught on video saying the Black community should “move the campus” of Howard University if they have issues with the effects of gentrification in Washington, D.C.

On Friday, a woman tweeted out a clip from a Fox5 story which showed Sean Grubbs-Robishaw saying, “They’re in a part of D.C., so they have to work within D.C., if they don’t want to be within D.C. then they move the campus,” he said, adding that it shouldn’t be a matter of whose community it is. “It’s our community and that’s how it should be.”

Recent reports have came out that Howard University Students feel disrespected by residents using the yard as a dog park 🐕 but this resident thinks the campus should be moved 😮😡 pic.twitter.com/stxHUWtu2X

According to the Fox5 video clip, Grubbs-Robishaw is a resident of Bloomingdale, a neighborhood close to the Howard University campus. Howard is a historically Black university.

There have been reports of people expressing concern and disappointment that the University’s quadrangle, known as The Yard, is being treated like a public park, with neighborhood residents walking their dogs on the private property.

Tension has been brewing for some time between wealthy, white residents who are moving into certain pockets of D.C. and the Black communities that have called those areas home. But for a white man to say that Howard, which has been at its current location for over 150 years, should move reeks of privilege and entitlement, which Twitter pointed out. Grubbs-Robishaw has since been assigned the nickname #GentrifyingGeorge:

When you move to a neighborhood, you're supposed to adapt to the culture there. Moving there and telling the locals they need to accommodate YOU or move is literally colonization lol #GentrifyingGeorge

What in the entire privileged gall gives someone the audacity to suggest moving a campus that has been around for 152 years?!???!? #gentrifyinggeorge please go have a stadium full of seats

What in the unseasoned caucasity… #gentrifyinggeorge is the latest example of white privilege run amok. Unlikely he has resided in DC for longer than a decade. Also unlikely he has any real knowledge about #HU because his privilege protects him from ever having to learn.

I sent this video to my daughter for her reaction to ol’ boy saying @HowardU should move the campus after 152 years, just so he can walk his dog. 😳🙄

Her response: “His ancestors made it happen.”

And some drew comparisons about what would (or wouldn’t) be allowed in other campuses:

And another thing… ITS A PRIVATE UNIVERSITY TF?! I can’t go to Baylor or Notre Dame & let my dog frolic can I? So why do you feel entitled to do so at Howard? #gentrifyinggeorge #StandWithHoward #RespectTheYard

So move a 152 year old institution so you can allow your dog to crap on the yard? The nerve! I wonder would he have said the same thing to students at GWU or John Hopkins?!#gentrifyinggeorge pic.twitter.com/WAS2cD3YB7

Howard University president Dr. Wayne A.I. Frederick released a statement about the issue and said while Howard recognizes service animals may be necessary for some, pet owners should respect the space.

“We are aware of the concerns regarding dog walking across campus. Howard is a private institution nestled in the heart of an urban city and we’ve shared a long-standing positive relationship with our evolving community for more than 150 years, which we look forward to continuing in the future,” he said.

“We recognize that service animals are a necessary aspect of modern-day life and we will accommodate them as needed. We appreciate pet owners respecting our campus by not bringing pets onto the private areas.”