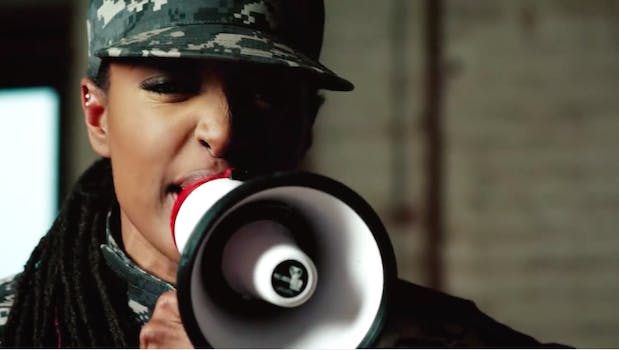 How ‘social justice warrior’ went from hero to joke

Is it time to retire the term—or reclaim it?

“Are you ready to promote social justice, acceptance, and tolerance?”

That’s what the drill sergeant yells at a boot camp trainee in a satirical “Social Justice Warrior Training” video produced by MTV in 2016. The video doesn’t make fun of social justice warriors (SJWs), though—in fact, it lauds them for promoting “basic dignity and respect” for everyone.

But the SJW label isn’t always spun in a positive light. At times, it’s difficult to parse out the implied meaning when someone throws the term “SJW” in a comment on Twitter, Tumblr, YouTube, or any other social media platform.

So what does it mean to self-identify as a social justice warrior? Where did the term come from, and how is it used to elevate the voices of political activists across social media? Also, conversely, what does it mean to be called an SJW? How has the term been turned around to be wielded as an insult?

We scoured the web—and spoke to a “notorious social justice warrior” as well as anti-SJWs—to find out how one term has come to represent a wide range of positions on civil rights issues facing our nation today.

What is social justice?

The term “social justice” has roots in Catholic texts and generally means the distribution of advantages and disadvantages to individuals in society.

Investopedia offers this definition: “Social justice is the idea that all members of society deserve an equal footing in terms of opportunities, political rights, and distribution of wealth and privilege so that they can lead fulfilling lives and realize their potential in the community.”

The biggest issues under the social justice umbrella today can be broken into two categories that overlap: how people are treated unequally in society because of their gender, race, age, sexual orientation, immigration status or disability; and how government policies affect people unequally, including taxes and access to education.

However, in one entry, Urban Dictionary defines an SJW as “a pejorative term for an individual who repeatedly and vehemently engages in arguments on social justice on the internet, often in a shallow or not well-thought-out way, for the purpose of raising their own personal reputation.”

But, like many words and acronyms thrown around on the internet and IRL, the term—or its definition, anyway—is in the eye of the beholder. So to understand what an SJW really is, it’s important to know where they came from.

Social Justice Warrior: Where did the term originate?

By most accounts, the term SJW originated on the wildly popular microblogging platform Tumblr. Searches for “social justice warrior” gained traction in 2012, according to Google Trends. Searches for the term  “social justice Tumblr”  skyrocketed alongside it. That same year, Tumblr had launched into the top 10 most popular websites in the U.S., with more than 89 million new posts generated every day.

1. The derogatory variety as seen by conservative beholders: always used as a blanket insult whether or not the SJW in question happens to be correct, and is being polite and nuanced about it.

2. Leftists who care about social justice issues: especially learning more about them, spreading that knowledge, and promoting excellent voices of marginalized groups directly. These SJWs aim on the whole to be nuanced, fair, and capable of critical thought about those issues; incidentally the standard by which we should attempt to behave.

3. CSJWs, for Counterproductive Social Justice Warriors: The kind of behaviors that provoke (and often deserve) its derogatory intent among leftists.

What does a self-proclaimed SJW say?

Coraline Ada Ehmke is a well-known software developer and social justice warrior. In 2016, she was invited to join GitHub’s team to help build community management and develop anti-harassment strategies for a company that in the past had been accused of fostering a culture of sexism and toxicity.

“A lot of the work that I do is about lifting up marginalized people,” Ehmke told the Daily Dot in a phone interview.

Up to that point, Ehmke had called herself a “tech feminist.” Her best-known work was in developing comprehensive codes of conduct for programmers to use in their software. Although she’s no longer with GitHub, Ehmke’s hire was regarded by many as a step forward in redeeming the tech company’s image and bringing diversity to the tech industry as a whole.

Not everyone saw it that way. When Ehmke was hired, the far-right news site Breitbart published an article with the headline “GitHub Hires Notorious Social Justice Warrior to Work on ‘Anti-Harassment.’”

The article condemned Ehmke as “a partisan feminist known for imposing hated progressive codes of conduct” and characterized her work as imposing censorship on coders in an authoritarian way. Breitbart didn’t get any of the facts about her work wrong, Ehmke said, but they used SJW as a negative term and were “trying to make it sound bad.”

“But it’s all work that I was really proud of,” Ehmke said. “So I just started to reclaim that title [of SJW] and wear it as a badge of honor.”

These days, Ehmke proudly announces via her Twitter bio that she’s a “notorious” SJW, and she uses it to describe the work she does “to dismantle systems of oppression”—for example, mentoring “underrepresented or marginalized” coders who are early in their careers, helping them navigate the field not only from a technical perspective but from social and political ones, too.

“[It’s] trying to equip them to deal with harassment and deal with being passed over, being looked down [on] and being ignored,” Ehmke said. “Trying to help them devise strategies for working through a system that doesn’t want them there.”

Although she said that most of the time she sees SJW used in online discourse in a negative, dismissive way, Ehmke thinks a good SJW is someone who disrupts the status quo and affects positive change through education and activism.

The Daily Dot spoke with a number of anti-SJW Facebook page admins who chose not to share their names. Across the board, they encompassed a wide range of political views and demographics, but they all shared a distaste for social justice and a desire to make fun of the SJW stereotype. The page is generally filled with memes of activism (primarily leftist views taken to the extreme) or Tumblr screenshots.

Though Facebook tends to be much tamer than forums like Reddit or 4chan, the Social Justice Warriors page is essentially a catch-all for conservative memes or anyone looking to make fun of outspoken activists, feminists, writers, bloggers, or average individuals who frequently address injustice.

“Social Justice Warrior would be those who believe they are fighting for social justice,” said the admin for the page Social Justice Warriors, which with more than 44,000 followers is by far the most popular. “They usually have socialist and/or progressive viewpoints and engage in behaviors we refer to as virtue signaling, getting ‘triggered’ if you don’t use their ‘pronouns’ correctly, et cetera.”

Several of the admins referred to SJWs as teachers or college students, indicating that the stereotype of an SJW permeates academia. The biggest complaint expressed was that SJWs don’t listen to the people they’re trying to educate.

“Social justice is a very important concept,” one admin told the Daily Dot. “We need people willing to stand up for minorities when they are mistreated, but we don’t need people assuming moral authority without any dialogue or silencing people just because people’s vocabularies offend them.”

Which is why, these days, those fighting for social justice choose to do without the loaded, co-opted idea of “warrior.” Because in an era where the president tweets a ban on transgender troops and makes excuses for white supremacists, the battle for equality isn’t ending anytime soon—and actions are more important than terms.