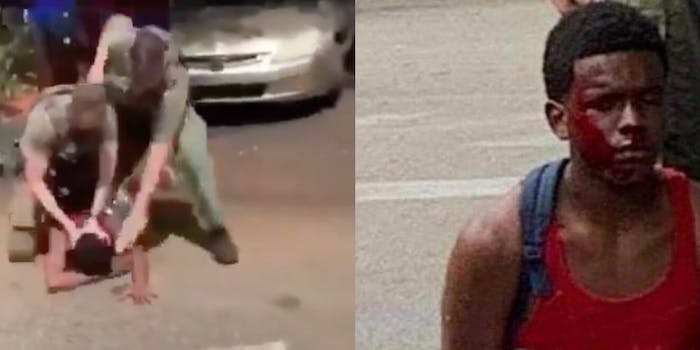 The incident occured outside a Florida McDonald's.

Two Florida police officers were caught on video this week banging the head of a Black teen to the ground. It’s an incident that’s prompted the hashtag #JusticeForLucca on social media.

The teen, who has not been named, was seen in numerous photos on social media with blood splattered across his face, and in videos showing a cop, since identified as Deputy Christopher Krickovich, pinning him down and banging his head on the ground. In the same video, Sgt. Greg Lacerra is seen joining him.

This is an act of police brutality and it will no longer stand in this community. We are doing everything we can to get people to share and repost this video so that we can seek #justiceforlucca pic.twitter.com/4Dgoddzxrz

Krickovich was reportedly made to surrender his gun and badge on Friday—a day after the incident took place outside a McDonald’s in Tamarac, Florida.

According to the Miami Herald, Krickovich said the two had been assigned that location on Thursday following a fight that took place a day prior. They arrived following another fight.

They arrested a teen who Krickovich said was not allowed at the location after Wednesday’s fight. After he put the teen on the ground, the teen’s cell phone dropped out of his pocket, which is when the victim, in a red tank top, tried to pick it up.

The video captures the moment when Krickovich knocks the teen on the ground, reportedly after Lacerra pepper-sprayed him. The teen is seen trying to cover his face, as Krickovich bangs his head to the ground while also landing two blows on his head with his other hand.

He wrote in his police report that he acted out of “fear” and because they were outnumbered by “the large group of students who were yelling, threatening us and surrounding us.

“I had to act quickly, fearing I would get struck or having a student potentially grab weapons off my belt,” he added.

It was the teen who was eventually arrested and charged for assaulting a police officer and resisting arrest.

Social media erupted over the weekend with #JusticeForLucca and a renewed conversation about the continued policing of Black children.

I'm tired of watching Black people being attacked while White killers are protected. I'm tired of the denialism that has become habitual for so many people in this country.

@browardsheriff why are you so quick to violate a private citizen’s rights and person, yet so slow to react to obvious violations committed by your staff? This is why police are losing respect and trust. #JusticeforLucca

I feel sick watching this. I’m so sick of police beating black people. Our country is sick. I cannot stand for this. #BlackLivesMatter #justiceforlucca https://t.co/1uu182rzYx

This is very hard to watch but it’s important that it’s seen. Unfortunately, this is the harsh reality of how many people of color are treated when interacting with the police. He’s only a child. #justiceforlucca https://t.co/ylpGGYS7xa

The incident took place in Broward County, the same county as the Parkland school shooting, which Twitter users mentioned to complain about the police response.

“And these same police [were] able to calmly arrest a 19 year old who just murdered 17 of classmates. He was taken into custody with out mark. A black teenager picks up a cell phone and gets his head slammed into the pavement,” wrote Twitter user Megan Lee.

So where are you @CNN and @MSNBC ? Same county as the Parkland mass shooting. White kid that murdered his peers got taken in without a scratch. This child did nothing. #justiceForLucca https://t.co/2zLFf2b275

And these same police where able to calmly arrest a 19 year old who just murdered 17 of classmates. He was taken into custody with out mark. A black teenager picks up a cell phone and gets his head slammed into the pavement. #justiceForLucca https://t.co/MbJRUy9HdV

A petition calls for the deputy to be fired and the release of the teen. It had more than 11,000 signatures as Saturday afternoon.

Sheriff Gregory Tony is committed to accountability in every case and at all times. We vow to conduct an open, transparent and thorough investigation into the incident that occurred April 18 in Tamarac. The deputy has been placed on restrictive administrative assignment. pic.twitter.com/9i4LPY4aGl

“I wanted to assure you that this incident is being conducted under a thorough investigation. We will look at this as a fact-finding measure to ensure that we hold folks accountable,” Tony said in the video. “Over the next few days, this may take some time for us to look thoroughly into. But understand that we will be transparent, and if folks need to be held accountable, it shall be done.”

Broward’s Sheriff Office was not immediately available for comment.

Correction: The petition has more than 11,000 signatures.