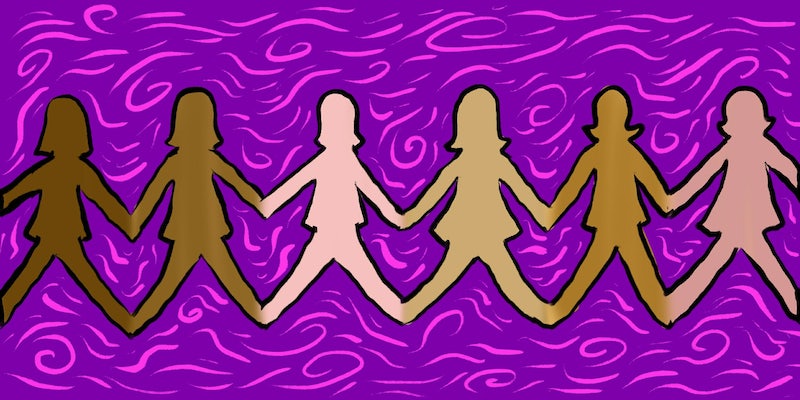 Your guide to the history, practice, and necessity of intersectionality.

If someone were to randomly ask me, “What are you?” I’d think they were asking me about my race—I’m Filipino and white, but those aren’t the only aspects of my identity that define me as a person. I’m also a heterosexual, cisgender woman. I’m an American citizen and an English speaker. And I’m able-bodied and generally neurotypical. All of these aspects of who I am affect one another, and make up the “intersection” of my identities. But is there an official intersectionality definition?

Within my work, in writing about race and identity, I know I must be intersectional and keep awareness of the perspective I write from. Though I have first-hand experience understanding gender discrimination and gender violence as a woman, my race, even being multi-racial and at times racially ambiguous, has protected me from experiencing anti-Black racism. Being heterosexual and cisgender allows me to exist in the world without being questioned about that existence. Being an able-bodied person, I’ve had no trouble with accessibility and moving through the world, be it through public spaces or with public transportation.

I think about these aspects of my own life as I write, knowing I only have a certain perspective through which I’ve gone through certain experiences, and use this awareness to make my writing more inclusive of the intersectionality of identities I do not share.

What is the definition of intersectionality?

“Intersectionality,” as defined by Merriam-Webster’s dictionary in 2017, is “the complex, cumulative manner in which the effects of different forms of discrimination (such as racism, sexism, and classism) combine, overlap, or intersect”—especially in the experiences of marginalized people or groups.

Teaching Tolerance, a resource for schools and educators from the Southern Poverty Law Center, further explains the basics of intersectionality with a video titled “Intersectionality 101.”

“Life isn’t the same for everyone—even for people who share identity characteristics,” the video summarizes. “By adopting an intersectional lens, we have a better opportunity to understand why and to change the institutions that help and harm us based on who we are.”

Where does the concept of intersectionality come from?

According to an incorrect interpretation of her speech at the Woman’s Rights Convention on May 29, 1851, Sojourner Truth first posed the question: “Ain’t I a woman?” It was a notable example of intersectionality.

Delivered more than a decade before the Civil War and the abolition of slavery, Truth’s speech juxtaposed the rapidly expanding movement for women’s rights with the stagnant oppression of racism under slavery. Having worked in slavery, Truth said she had as much muscle as a man and could work and eat as much as a man. Though she is equal to a man in every physical way, wasn’t she also a woman, therefore proving that women are equal to men? Or did the intersectionality of her race and gender discount her experience as a woman altogether?

Despite its popularity and resonance, the phrase was never uttered by Truth at all, according to the Sojourner Truth Project. This version of the speech was constructed by Frances Dana Gage in 1863, nearly 12 years after Truth’s speech, and differs greatly from the version Marius Robinson, a friend of Truth’s, first transcribed and printed with Truth’s approval in 1851. The phrase isn’t completely ahistorical: It stems from an abolitionist campaign slogan, “Am I not a woman and a sister?” The intent of Truth’s speech was still about intersectionality.

The evolution of intersectionality

Along with Truth, writer Anna Julia Cooper is another frequently-cited authority on early mentions of intersectionality, with her essay “The Colored Woman’s Office.”

Penned in 1892, Cooper’s piece explores the importance of Black women in social movements on the basis of their experience with multiple forms of discrimination. W. E. B. Du Bois’ writing too examined the intersections of race, class, and nation and how they affected the African-American community’s access to status, poverty, and power, though Du Bois’ analysis did not involve the role of gender. bell hooks’ 1981 book Ain’t I A Woman: Black Women and Feminism, invoking Truth’s speech, also explores how racism and sexism within slavery went on to affect civil rights and feminist movements.

It was legal scholar Kimberlé Crenshaw, however, who first coined the term “intersectionality theory” in her 1989 essay, “Demarginalizing the Intersection of Race and Sex: A Black Feminist Critique of Antidiscrimination Doctrine, Feminist Theory and Antiracist Politics.”

In the essay, Crenshaw analyzes the ways in which Black women have been historically discounted for the intersections of their race, gender, and class through legal sex and discrimination cases, the feminist and civil rights movements, and media representation. For example, Crenshaw wrote that Black women are either considered “too much like women or Blacks” to the point of making their experiences “too different” from the goals of both the feminist and Black liberation movements, pushing the perspectives and needs of Black women to the margins of both.

Crewshaw also drew upon Truth’s “Ain’t I a Woman,” speech in her essay. At the time of Truth’s speech, white women had urged that Truth remain silent. They feared that she’d divert attention from the women’s suffrage movement to the emancipation of slaves. According to Crenshaw, Truth challenged both the patriarchy and white womanhood by calling attention to the ways in which men and white women saw women such as Truth as someone “different” from “real women.”

Through the 1990s, sociologist Patricia Hill Collins brought intersectionality into prominence with her writing on Black feminism. In a speech she delivered at Montgomery College in 2017, she explored how Black feminist intersectionality shapes the imagination around democratic possibilities for the future and how marginalized groups should support one another.

What are some examples of intersectionality?

Intersectionality can be applied to any number of topics, such as politics, education, and healthcare.

Another example is in Texas, where Black mothers have the highest rate of dying as a result of pregnancy in the state. Between 2012 and 2015, Black women delivered only 11 percent of the babies in the state, but they made up 20 percent of these maternal deaths, the Texas Tribune reported. In healthcare, doctors can make their practices more intersectional by acknowledging and addressing this alarming race discrepancy. They can push for reforms that seek to close this gap and provide better healthcare for Black women in addition to all mothers.

In politics, groups like EMILY’s List, Annie’s List, She Should Run provide opportunities for women—particularly women of color—to run for office. By making public office more accessible, these organizations are paying attention to the intersectionality of gender, race, and class.

How can we become more intersectional in our activism?

Today, we see women continue to campaign for feminism with the awareness that they are not only pushing for women’s equality for white women, but also for women of color, women of different sexualities, and women with different abilities.

Still, major liberal political movements are often criticized for failing to craft the movement around the intersectionality of all members. Some critics of the first Women’s March took issue with its partnerships with anti-abortion organizations. Others criticized signage that focused solely on female sexual organs as a symbol of women’s rights, which espoused anti-transgender beliefs. This is also often referred to as “trans-exclusionary radical feminism.”

Activist movements can also work toward being more accessible to people of different abilities and languages. For example, during live events or in videos, sign language interpreters and captions should be standard. Events and demonstrations should be held at spaces with ramps and designated seating for people who need mobility accommodations.