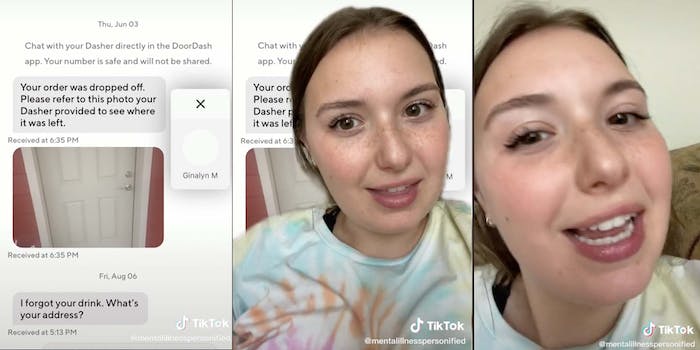 'If you were really doing my order, wouldn't you have my address?'

A TikToker says a possible DoorDash driver tried to get her address and deliver food to her when she didn’t order anything. She says he, in the past, accepted orders from her only.

Sydney Span (@mentalillnesspersonified) recounts in a viral video how she received a DoorDash order from a deliverer named Edward in June and that, months later, she received a message from him asking for her address.

“Stay safe, because the weirdest thing just happened to me,” begins the TikTok, posted on Aug. 7.

She says that under the guise of saying he “forgot her drink,” Edward attempted to contact Span through the DoorDash app. “I forgot your drink. What’s your address?” the message from Edward, shared in the TikTok, reads.

Span says that she didn’t even order anything.

“That’s odd, because, first of all, I didn’t order anything,” she says. “If you were really doing my order, wouldn’t you have my address?”

In the video, Span says that she contacted DoorDash’s customer support line and that a worker told her that they aren’t familiar with Edward and that he’s “only ever done” orders for her.”‘Don’t answer that text. Don’t answer your door,” she recalls the worker telling her.

In a later video, Span says that DoorDash told her that the only records they had on file for Edward are related to her. She says she’s not sure how he was able to contact her on the DoorDash app if he isn’t a DoorDash employee. In another followup video, she confirms she is safe and says she will be getting “security stuff” for unrelated safety concerns.

“At DoorDash, we take the safety of our community extremely seriously and we do not tolerate any form of harassment or inappropriate behavior,” a spokesperson for DoorDash told the Daily Dot after a similar incident in 2019.

The Daily Dot has reached out to Sydney Span and DoorDash.