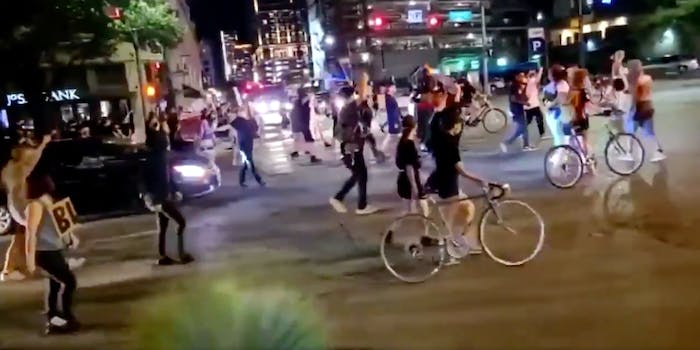 Several gunshots can be heard ringing out, prompting protesters to scream, run away from the scene, and duck for cover.

A Facebook Live captured the moment a suspect opened fire at a Black Lives Matter protest in Austin. One man was fatally shot.

Hiram Gilberto’s stream shows the protesters chanting and marching through downtown. When they approach Fourth Street and Congress Avenue, honking can be heard, and some in the crowd turn around and start to head in the opposite direction. Several gunshots can then be heard ringing out, prompting protesters to scream, run away from the scene, and duck for cover.

Medics performed CPR on a man who was shot, according to KUT. During a press briefing held around midnight on Sunday, Austin Police Department Officer Katrina Ratcliff said the victim was taken to a nearby hospital, where he died.

On Sunday morning, Good Morning America interviewed Sheila Foster, who says her son, Garrett Foster, was the demonstrator who was killed, according to KVUE.

Ratcliff added that the suspect opened fire from inside a vehicle and has since been detained and is cooperating. Ratcliff said that, according to “initial reports,” the victim may have been carrying a rifle and approached the suspect’s vehicle.

An alleged witness told KUT that the suspect almost ran over “a bunch of protesters.”

“Everybody around starts like smacking the car trying to get him to slow down,” the alleged witness said. “He pulls down his window and he fires three shots into the guy. From point-blank. No words no nothing. And then rolls up his window and zooms off.”

No one else has reported any injuries from the shooting, Ratcliff added.