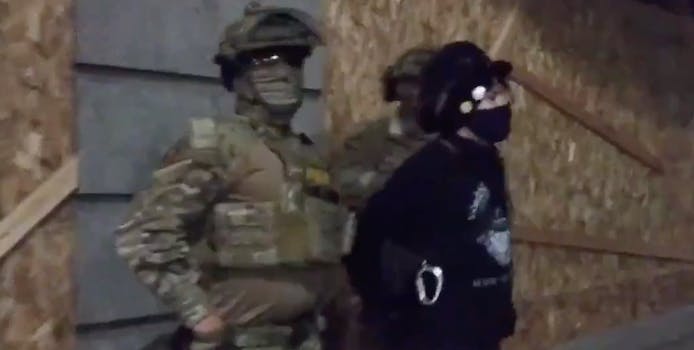 What you need to know about the ‘federal occupation’ of Portland

Federal agents are abducting people off the street in unmarked vans

As coverage of the George Floyd protests has dropped off over the last couple weeks, with coronavirus surging back into the news, activists and local journalists in and around Portland have been begging for media coverage of what they call a “Federal Occupation.”

They allege Portland is a testing ground for what’s coming next in other American cities.

Portland has seen nightly protests since the killing of George Floyd in May. After about 25% of those nights ended with Portland Police deploying tear gas, District Court Judge Marco Hernandez issued a series of restraining orders.

Those orders barred Portland Police from using tear gas outside of situations that posed a risk to the lives or safety of the public or the police.

In addition, it prohibited the arrest or use of force against journalists and observers without reasonable cause.

Two weeks later on June 26 the orders were expanded to include “less lethal” munitions as well.

But also on June 26, President Donald Trump issued an executive order to protect government-owned monuments and statues, authorizing the federal government to take action against anyone who damaged them.

By July 2, this order had been used to deploy federal agents to Portland.

However, instead of announcing this to the public, officials claimed that the only federal agents in Portland were federal marshals who were only there to protect federal property and wouldn’t engage in crowd control downtown.

It wasn’t until July 10, when an Associated Press article shared a quote from an anonymous senior official with the Department of Homeland Security, that the scope of things became clear. Federal agents from dozens of agencies under Homeland Security from across the United States had been sent to Portland to suppress the protests.

It’s unclear how much the local authorities knew in advance about federal agents coming to police Portland; though several officials have confirmed that the agencies deployed were neither invited nor particularly welcome. Deputy Police Chief Chris Davis told the Associated Press that his department did not request and does not coordinate with the federal agencies patrolling his city.

“I don’t have authority to order federal officers to do things,” the police chief told the Associated Press. “It does complicate things for us.”

Not bound by the restraining orders affecting Portland PD, the federal agents have frequently used tear gas and less than lethal munitions against protesters. The federal agents are dressed in tactical gear and identified only by small, hard-to-make-out patches on their uniforms.

There have been reports of federal agents stationing snipers on roofs, using unnecessary force against protesters, and making arrests on dubious grounds, such as “destruction of government property” for drawing on the sidewalk with chalk.

After federal agents shot protester Donovan LaBella with an impact round, leaving him with a fractured skull and in need of cranial and facial reconstructive surgery, Sen. Ron Wyden (D-Ore.) spoke out.

Describing the federal agents as “acting like an occupying army,” Wyden demanded answers from both Trump and Homeland Security.

Wyden, alongside Senator Jeff Merkley (D.-Ore.), and U.S. Reps. Earl Blumenauer (D.-Ore.) and Suzanne Bonamici (D.-Ore.), also demanded an explanation from Attorney General William Barr and acting Secretary of Homeland Security Chad Wolf, expressing concern that the U.S. Marshals and others are taking direction from federal agents outside of Oregon.

Speaking during a roundtable the following day, Trump expressed nothing but approval for the federal agents handling of events in Portland.

“We’ve done a great job in Portland,” Trump said. “We very much quelled it. If it starts again, we’ll quell it again, very easily. It’s not hard to do.”

Acting Secretary of Homeland Security Chad Wolf also seems to have no intention of pulling the federal agents out of Portland. Instead, he released an announcement against the “lawless destruction and violence of the past several weeks.”

“This siege can end if state and local officials decide to take appropriate action instead of refusing to enforce the law. DHS will not abdicate its solemn duty to protect federal facilities and those within them. Again, I reiterate the Department’s offer to assist local and state leaders to bring an end to the violence perpetuated by anarchists.”

Since Trump’s round table, Mayor Ted Wheeler and City Commissioner Chloe Eudaly have also spoken out, stating that Portland did not need the federal agency’s help.

Most worrying for many are the allegations that emerged Thursday night that federal agents have been abducting people off the street in unmarked vans. Activists shared videos that show agents driving up to protesters and detaining them without identifying themselves or informing them why they’re being detained.

Many see the situation in Portland as a trial run for martial law elsewhere in America. Trump’s announcement that he intends to deploy federal agents to other “war zone” cities, most of them Democratic, has only intensified their suspicion.

Wheeler, responding to the White House press secretary’s apparent targeting of Chicago and its Mayor Lori Lightfoot, referred to it as “a coordinated strategy from the White House” before once again demanding they removed their “heightened troop presence” from the city.

Given that Trump has boasted about declaring antifa a domestic terror threat—even if he hasn’t officially followed through—it seems DHS is willing to use tactics similar to how the U.S. handled terror groups abroad right here on American soil.