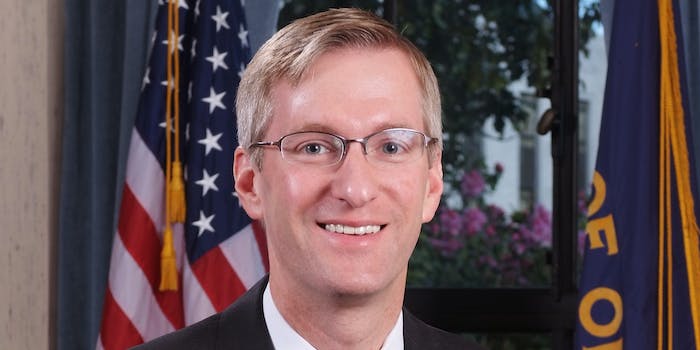 He said feds are waging 'urban warfare' in Portland.

The videos, captured by New York Times correspondent Mike Baker, show Wheeler joining protesters on July 22. As he reached the crowded streets, Wheeler was promptly confronted by protesters. He answered questions from some, even as others cursed him, calling the mayor a “fascist.”

The videos appear to span at least four hours. Over the course of the evening, Wheeler stopped to speak at several points. Donned in a simple blue surgical mask, Wheeler addressed the crowd through a speaker system that could hardly be heard over cries of protest from the gathered throngs.

Eventually, Wheeler managed to engage in a “listening session” in the midst of the crowd. Protesters demanded answers to a number of questions about the federal occupation of the city, which the mayor tried to answer over the clamor of the surrounding mass. He promised that he was doing everything in his power to get federal officers “to leave.”

He noted that this required him to raise the alarm on a national level, as well as work with members of the judiciary to assist protesters. When Wheeler asserted that he does not commit to abolishing the police, protesters erupted in anger.

As he attempted to explain his stance, a list of demands was projected onto the wall behind him. The list boasted only four demands: “1) Defund PPB by 50 percent at least and reinvest in the communities. Especially the Black community. 2) Free all protesters from jail. 3) Feds out of Portland now. 4) You, Ted Wheeler, need to resign.”

Eventually, Wheeler made his way out of the crowd and onto the steps of the justice building. There, he continued to address protesters and noted that, as police commissioner, he takes “responsibility for the actions of police officers.” He also expressed a desire to use the fervor of protesters to work toward significant change. When he demanded that federal officers leave the city, the crowd erupted into cheers.

“They were not asked to be here,” Wheeler said. “They are not wanted here. They are not properly trained to be here, and we are asking them right this minute, demanding, that they leave. We demand that the federal government stop occupying our city.”

Soon after his speech, Wheeler made to leave. On his way out, however, protesters called on him to join the front lines at the federal courthouse, and he agreed. He made his way through the throngs to the congested area, where he stood alongside protesters as the first round of teargas was unleashed.

Soon after, Wheeler donned goggles to protect his eyes from the gas. Despite his protective gear, the mayor can be seen hacking and tearing up along with the rest of the gathered crowd. He noted to reporters that the teargas “stings” and makes it “hard to breathe.”

“I can tell you with 100% honesty, I saw nothing that provoked this response,” he said. “It’s nasty stuff. I’m not afraid, but I am pissed off.” He called the move by feds an “egregious overreaction” and “urban warfare.”

Soon after Wheeler made his statements, the feds reemerged. Another volley of teargas pushed Wheeler and his team from the front lines, coughing and stumbling through the smoke.

The reaction to the videos has been thoroughly split. Many commenters continued to press Wheeler for more change and called on him to resign. Others gathered to support his move, praising the mayor for joining the protests.