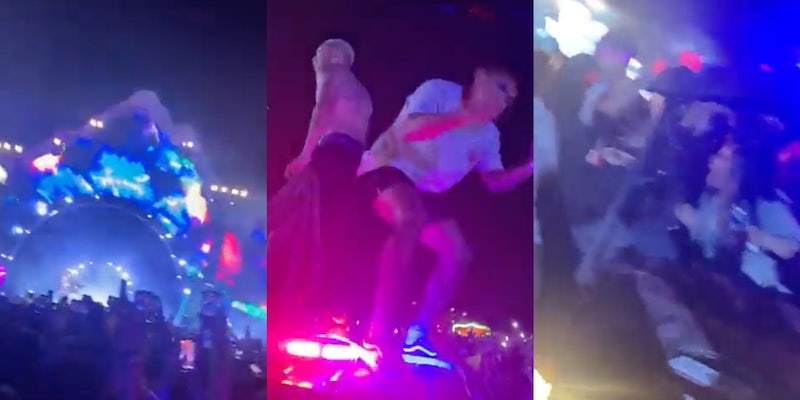 'You can't really defend this.'

Numerous viral videos depict a horrifying scene that left eight people dead and hundreds injured Friday night during the third annual Astroworld Festival at NRG Park in Houston. The chaos, which began earlier in the day, apparently left some first responders impeded from assisting victims—some of which were trampled or suffered cardiac arrests.

A crowd of approximately 50,000 concertgoers began to move toward the front of the stage at around 9:00 pm. Houston Police called the incident a “mass casualty” event. A missing persons and reunification location for families was established nearby.

“The crowd began to compress toward the front of the stage, and people began to panic,” Houston Fire Chief Samuel Peña said told ABC 13. The outlet reported that the organizers, rapper Travis Scott and LiveNation, “stopped the show when it was apparent that multiple people were hurt.” Many festivalgoers were trampled in the process.

A viral Reddit video showed an EMS cart trying to push through the Astroworld crowd.

Other videos of fans dancing atop emergency vehicles emerged.

The videos of people jumping on EMS carts depicted one of the challenges medics faced when trying to help injured attendees. There were also accounts of healthcare workers witnessing havoc. The Daily Dot reported on one attendee, who is a nurse, that claimed some responders did not have the necessary training and equipment to do their tasks.

However, many videos from Astroworld show that the chaos had started much earlier in the day, and went largely unmitigated. People overran the extensive fencing at the front of the event and barged their way into the Astroworld Festival. ABC 13 journalist Mycah Hatfield reported: “As we were arriving to the Astroworld Festival at NRG Park right at 2:00, a stampede burst through the gates. Hundreds of people destroyed the VIP security entrance, bypassing the checkpoint. People were trampled. Some were detained.”

Event organizers canceled the rest of the festival, which was scheduled to end Saturday. The Daily Dot has reached out to Live Nation and the Houston Police Department for comment.