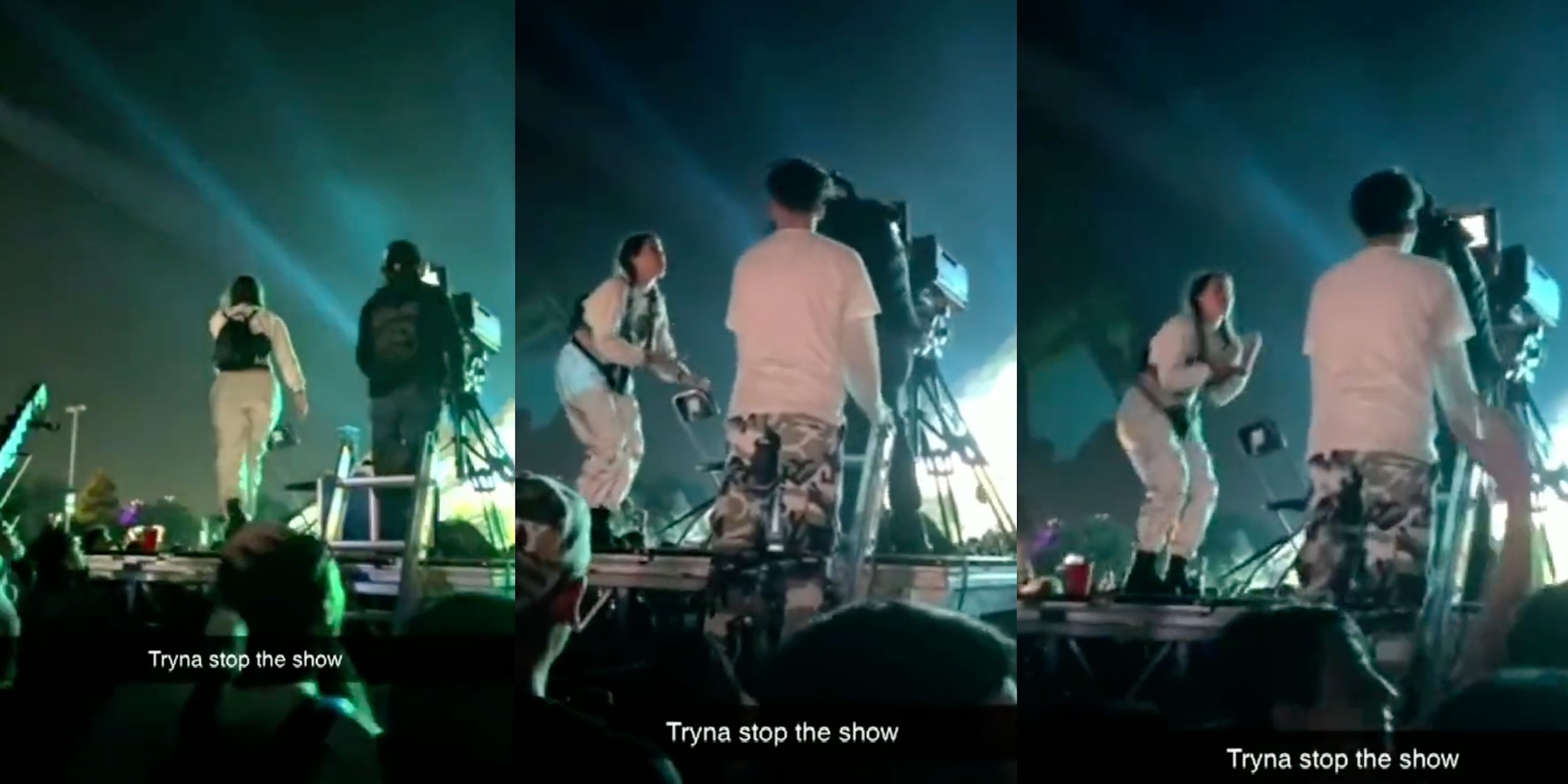 ‘They did nothing’: Viral videos show woman warning Astroworld cameraman about crowd trampling

Travis Scott and event organizers are being criticized for not stopping the show fast enough.

Video footage from Friday’s Astroworld festival shows that attendees were attempting to warn crew of the chaos unfolding in the audience.

During the Travis Scott-curated event on Nov. 5, a crowd surge left at least eight attendees dead, with many others injured. Now, people are calling for Scott and the event’s organizers to be held accountable. The second day of the festival has been canceled.

The video, shared to Twitter by @WulfMonkey, shows two attendees climbing the ladder and trying to get the attention of the camera man who was filming the concert. The poster wrote that the cameraman avoided them entirely.

The woman who attempted to alert the cameraman, identified by the poster of the video as Seanna Faith (@seannafaith on Instagram), has also taken to social media to share her experience and call out the organizers of the event.

“Who I am in this story is not important, rather it is important the things I have now witnessed,” she wrote in an Instagram post. “Astroworld, Houston, Texas. Travis Scott is the only one performing. I don’t know how many people were at the festival, but I do know every single person was at that stage.”

She wrote that she and a friend had tried to get close to the stage, making it to a barrier near the walkway in the middle of the setup. She describes the rush of people pushing forward, as other attendees began to struggle.

“There were so many people,” she wrote. “Tall men, women. Women and men where the only thing they could see was the back of the person in front of them. The rush of people became tighter and tighter. Breathing became something only a few were capable of. The rest were crushed or unable to breathe in the thick, hot air. My friend began to gasp for breath, and she told me we needed to get out. We tried. There was no where to go. the shoving got harder and harder. If someone’s arms had been up, it was no longer a possibility to put it down.”

In her post, she describes security being nearby as people began to scream for help.

“Hundreds of people ripped their vocal cords apart screaming for help, but we were not heard,” she wrote. “There was nowhere to go. My friend was trapped between people on every side of her, and she desperately tried to move towards the rail. It was no use. The screaming intensified, as more people realized they could not breathe. We begged security to help us, for the performer to see us and know something was wrong. None of that came.”

She also describes witnessing the trampling of others at the concert, and when she told a cameraman that people were dying, she says she was brushed off, and that another man threatened to push her off of the 15-foot tall filming platform. She says people in the crowd began booing her.

On Twitter, users are calling for Scott and the event organizers to be held accountable.

“Travis Scott should be held responsible in some degree. Seeing these posts and videos where people were BEGGING them to stop, and he heard them and still kept going is evil af. I feel so bad for everyone there. RIP to those who make it,” one user wrote.

One user called out the behavior of attendees that resulted in the deaths, although the person misstated the amount of confirmed fatalities at the time of posting.

“11 people died at Travis Scott’s Astrofest just because people were willing to literally run over people to be closer to see the performance thats so crazy the idolization of celebrities is sick,” musician @RapDose wrote.

A statement expressing condolences to those impacted by the festival has been shared from the @astroworldfest Twitter account.

“Our hearts are with the Astroworld Festival family tonight—especially those we lost and their loved ones,” the statement reads. “We are focused on supporting local officials however we can. With that in mind, the festival will no longer be held on Saturday. As authorities mentioned in their press conference earlier, they are looking into the series of cardiac arrests that took place. If you have any relevant information on this please reach out to @HoustonPolice. Thank you to our partners at the Houston Police Department, Fire Department and NRG park for their response and support.”

The Daily Dot has reached out to Seanna via Instagram, as well as Astroworld Festival organizers and representation for Travis Scott for comment.

Clarification: A previous version of this post had a subheadline that stated “Travis Scott and event organizers are being criticized for not stopping the show.” It has been updated to reflect that the show was stopped eventually, but critics think it should have ended sooner.