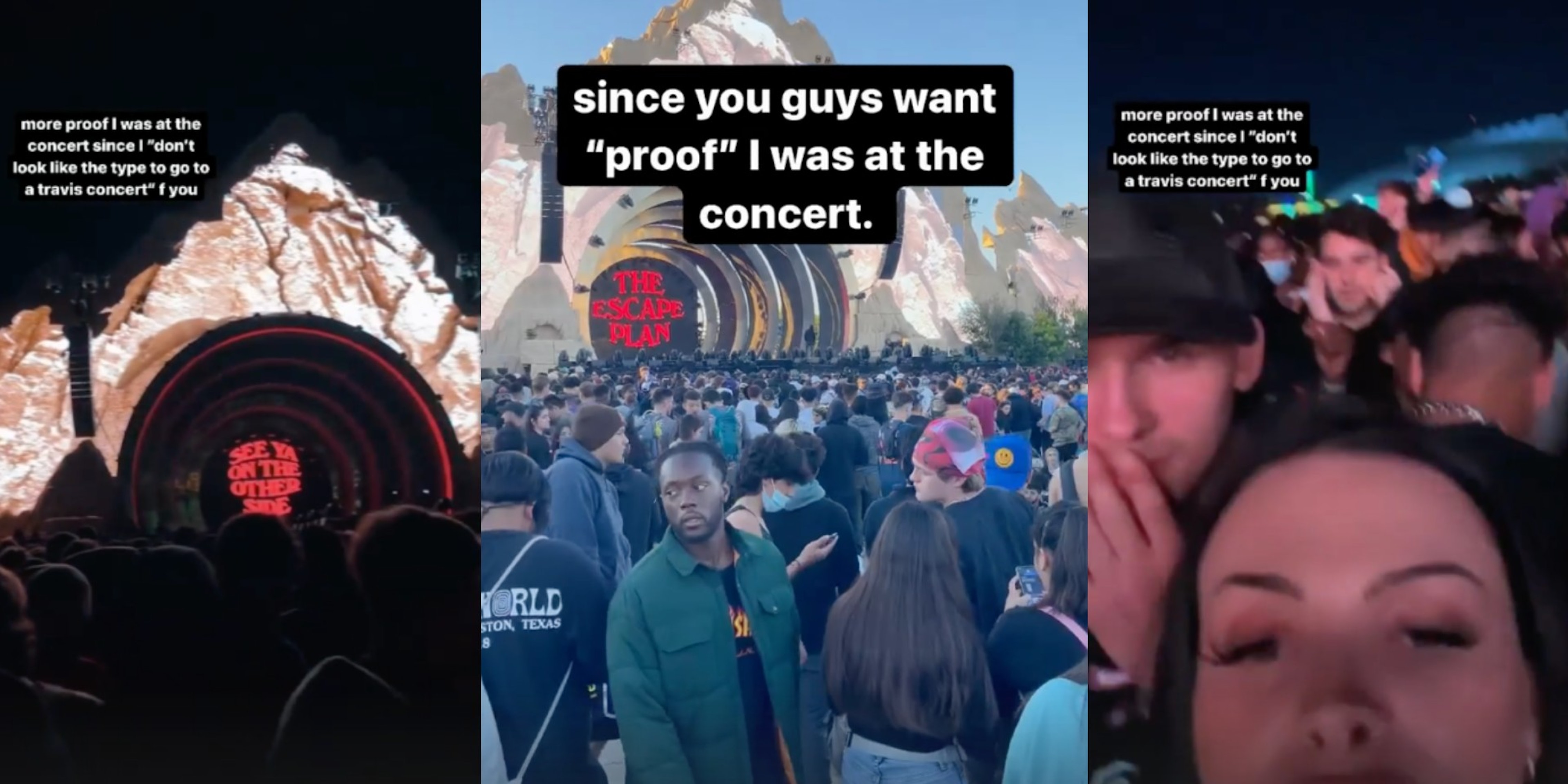 She had passed out herself, then immediately tried to help others.

An ICU nurse who attended this weekend’s Astroworld festival—and ended up assisting what she described as a scarce and unprepared medical crew—said she’s never felt “more disturbed.”

So far eight people were reported dead and dozens were injured at the Travis Scott show, reported the New York Times at the time of this article’s publication. The pandemonium was started by people charging toward the front of the crowd to get closer to the artist.

Nurse Madeline Eskins said she’s been to every Astroworld festival but this year was “completely different” and “fucking terrible,” she wrote in a detailed Instagram statement.

Eskins herself passed out during the festival because people were pushing up against her to the point that she couldn’t breathe. Her partner Sam allegedly got the people around them to crowd surf her unconscious body to the security guards, where she was eventually carried to a section behind general admission and sat on a stool. She woke up with a water bottle in her lap and no recollection of what had just happened.

“When I stood up I looked around and people were getting carried out with eyes rolled back into their heads by security, bleeding from their nose and mouth,” Eskins wrote.

The nurse yelled out whether anybody had checked people’s pulses but no one had. After learning she was an ICU nurse, a security guard asked her to please help.

Eskins said she checked two people’s pulses and one person did not have a pulse. Back at the medical area, she noticed that the medical approach of the staff was chaotic and showed obvious inexperience. They were also understaffed.

Since pulses weren’t being checked, some people with a pulse were getting CPR while those pulseless weren’t. When she asked about basic medical equipment like “ambu bags” (used to help people breathe) and AEDs (an electronic defibrillator used to restart a person’s heart), she was told there were only one of each. At that point, she says there were four people “pulseless and blue.”

Though people from the crowd—including teenagers—were trying to help, many were doing CPR incorrectly and others were performing it on people who already had a pulse.

Eskins lost her partner for a chunk of time while she did compressions, bagged people, and got them on to stretchers.

“People were trampled, crushed. There was no cell service to call for more help,” Eskins wrote. “…I am so disappointed and sad.”

The police eventually showed up with more stretchers and started to get people out, but by then Eskins knew of at least two people who’d been pulseless for at least 15 minutes.

“Despite the crowd around us trying to get someone to stop the concert they just kept going. Even though Travis acknowledged that someone in the [crowd] needed an ambulance,” Eskins said in the post caption.

Eskins also posted pictures from the festival to her Instagram Story early Saturday to show folks that she was actually present. People in the comments were horrified on behalf of the victims and thankful to Eskins for doing her part despite potentially being traumatized in the process.

“So heartbreaking. No one deserves to die at a fucking concert,” @emma.mudge commented.

“Thank you for trying to help others even as you were traumatized yourself omg,” @chevonmedia said.

Eskins could not be reached for immediate comment; she was contacted via Instagram direct message. The Daily Dot reached out to NRG Park for more information.

Update 7:34 pm CT Nov. 8: In a statement to the Daily Dot, a spokesperson for the medical team in charge at Astroworld said, “There were ample resources of medication, remedies, treatments and supplies, and the demand and usage did not exceed the onsite stock.”

Still, eyewitnesses like Eskins reported a lack of resources for a mass casualty. Houston fire chief Samuel Peña said in a press conference Saturday, “They had doctors on scene, they had medical EMTs, they had volunteers. For a non-event, that would’ve been enough. But when the event started to escalate, we had to come in and augment their assistance.”