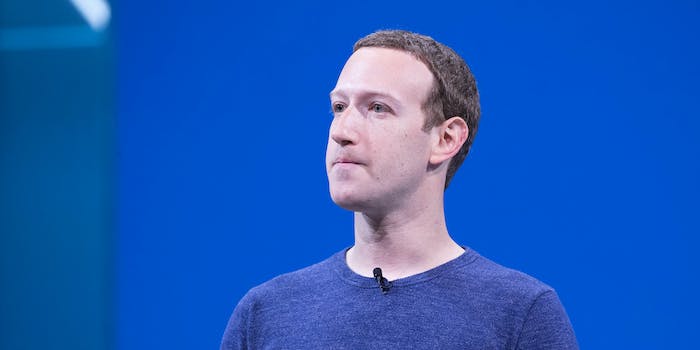 Facebook CEO Mark Zuckerberg will tell Congress that he supports changes to Section 230 of the Communications Decency Act when he testifies on Thursday.

Zuckerberg has said in the past he was open to Section 230 reform. Section 230 shields all websites for being held liable over what is posted on them by third parties. It’s been hailed as an important internet law and helps protect not only big tech companies but small blogs and other websites.

Tech advocates and experts have raised alarms that changes to the law could have widespread ramifications online.

Despite this, it’s become a target for both Democrats and Republicans in Congress. Former President Donald Trump railed against the law for months and, as a candidate, President Joe Biden also said he’d be open to repealing it.

Zuckerberg is joining Twitter CEO Jack Dorsey and Google CEO Sundar Pichai in testifying before the House Energy and Commerce Committee on Thursday about disinformation online. It’s likely—given the constant stream of Section 230 bills that have come out of Congress—that the law will be brought up throughout the hearing.

In his opening remarks that were released on Wednesday, Zuckerberg makes it clear that he thinks Congress needs to tackle “thoughtful reform” of Section 230 and proposes having the protections be contingent on companies meeting a set of “best practices.”

“We believe Congress should consider making platforms’ intermediary liability protection for certain types of unlawful content conditional on companies’ ability to meet best practices to combat the spread of this content,” Zuckerberg’s statement reads. “Instead of being granted immunity, platforms should be required to demonstrate that they have systems in place for identifying unlawful content and removing it.”

If “best practices” rings a bell in regards to Section 230, it’s because that was a proposal in a version of the much-criticized EARN IT Act. That bill faced a flood of criticism from tech advocacy groups, sex workers, and lawmakers.

A version of the EARN IT Act would create a task force of officials from various government agencies including the Justice Department to create a set of “best practices” for websites to follow in combating child exploitation content online in order to get Section 230 protections.

Zuckerberg’s proposal goes on to say that platforms shouldn’t be liable for not detecting content that evades the systems, but only if they don’t have “adequate systems in place to address unlawful content.”

However, unlike the EARN IT Act, Zuckerberg proposes that the “best practices” should not include “unrelated issues like encryption or privacy changes.”

The EARN IT Act was criticized because the Justice Department—who would be part of the task force creating the “best practices”—has long sought a back door into encryption and would likely require it in the law.

While Zuckerberg laid out potential changes to Section 230, Pichai’s opening statement warns against “many recent proposals to change Section 230—including calls to repeal it altogether.” It notes that they would “have unintended consequences” that would harm “both free expression and the ability of platforms to take responsible action to protect users in the face of constantly evolving challenges.”