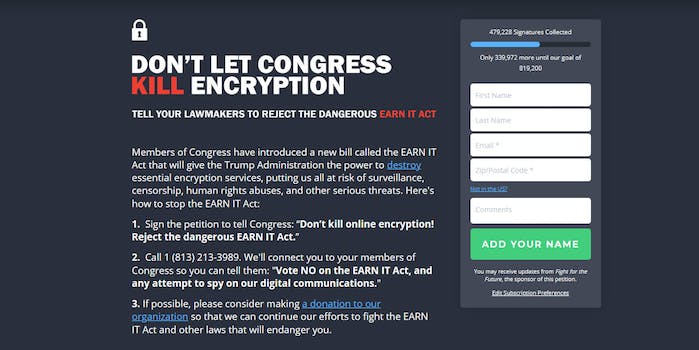 A lot of people are calling on lawmakers to kill the bill.

A petition calling on members of Congress to reject the controversial EARN IT Act because it could “kill encryption” has garnered nearly 500,000 signatures.

The bill, which was unveiled by a bipartisan group of senators in early March, would force websites to adhere to a set of “best practices” for removing child exploitation content or risk having Section 230 of the Communications Decency Act immunity be taken away.

The bill has been fiercely criticized by internet rights advocates because of the influence the Justice Department and the attorney general would have on the commission that would create those “best practices.” Given the department’s long-standing desire to create back doors into encryption, advocates have argued it’s not a stretch to think—and perhaps is likely—such a back door would be added as a “best practice.”

Section 230 has been hailed as an essential building block for the internet, as it protects websites from being liable for what is posted on them by third parties. The section has seen a string of attacks and criticism from the Justice Department, former Vice President Joe Biden, and most recently, President Donald Trump.

Not all lawmakers have expressed support for the EARN IT Act, with Sen. Ron Wyden (D-Ore.) calling it a “Trojan horse” that would “give Attorney General [William] Barr and Donald Trump the power to control online speech and require government access to every aspect of Americans’ lives.”

It appears that many other people feel the same way.

A petition from internet rights group Fight for the Future has collected around 480,000 signatures as of Monday morning. The petition asks for members of Congress to “reject the dangerous EARN IT Act.”

The website for the petition also has a phone number people can call that will connect them to members of Congress.

Evan Greer, the deputy director of Fight for the Future, told the Daily Dot the petition went viral over the past week as “people are more aware than ever that encryption is an essential tool to keep people safe from police and government surveillance.”

“The EARN IT act is a perfect storm of bad ideas. It threatens to enable mass surveillance and monitoring of our internet activity and communications, while also posing an existential threat to online freedom of expression,” Greer said. “Lawmakers need to stop using Section 230 of the Communications Decency Act as a political football. It’s dangerous and just plain silly. We can and should take steps to make the internet safer for everyone. The EARN IT act does the opposite of that.”

In April, the popular encrypted messaging app Signal warned that if the EARN IT Act was passed, it would make it impossible for companies like it to operate in the United States.

Joshua Lund, a developer at Signal, said if a back door into encryption was a “best practice” in the bill—therefore dangling Section 230—it would open up Signal, which uses end-to-end encryption so only the sender and receiver can see messages, to liability.

“Some large tech behemoths could hypothetically shoulder the enormous financial burden of handling hundreds of new lawsuits if they suddenly became responsible for the random things their users say, but it would not be possible for a small nonprofit like Signal to continue to operate within the United States,” Lund wrote in a blog post.