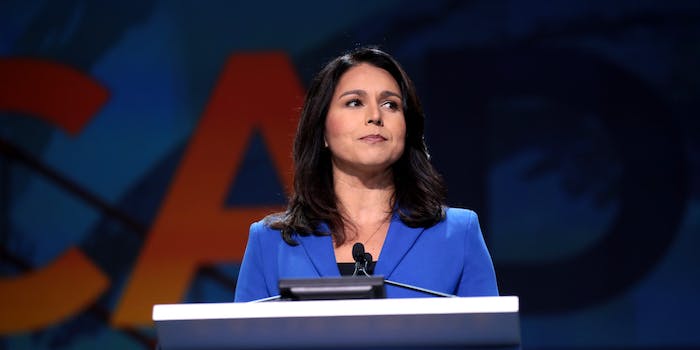 Break Up Big Tech Act is the second time Gabbard and Gosar have co-sponsored legislation.

Rep. Tulsi Gabbard (D-Hawaii) and Rep. Paul Gosar (R-Ariz.) are co-sponsoring legislation that would repeal Section 230 of the Communications Act.

The “Break Up Big Tech Act” would remove Section 230’s legal immunity from platforms for content posted on their sites if those platforms “engage in certain manipulative practices, including acting as publishers and censoring certain users,” Gabbard’s office said in a release.

“The law is out of date and has not kept up with the destructive practices of big tech monopolies, who are essentially acting as publishers with the use of manipulative algorithms,” it added.

The release enumerates the following examples of the types of activities that will be deemed manipulative should the bill pass:

Selling and displaying personalized as well as contextual advertising without user’s consent;

Collecting data for commercial purposes other than the direct sale of the interactive computer service, i.e. turning the user into a commodity or otherwise monetizing the transmission of content;

Acting as a marketplace in the digital space by facilitating the placement of items into the stream of commerce;

Employing digital products and designs intended to engage and addict users to the service; and

Acting as a publisher by using algorithms to moderate or censor content without opt-in from users.

Section 230 has been referred to as “one of the most valuable tools for protecting freedom of expression and innovation on the internet.” Repealing it would open every website and platform to litigation for content posted by users, such as comments on news articles, social media posts, and potentially even reactions.

Many conservatives believe that they’re disproportionately targeted, inaccurately arguing that this is censorship. Earlier this month, President Donald Trump vowed that he would veto a defense spending bill unless it was repealed. (The House responded by passing it with a veto-proof majority.) In May, Trump signed an executive order aimed at repealing it. The effort has thus far been unsuccessful.

President-elect Joe Biden has also indicated that amending or repealing Section 230 will be on the table in his administration. Biden’s complaints center on the misinformation that platforms allow to proliferate.

“I, for one, think we should be considering taking away the exemption that they cannot be sued for knowingly engaged on, in promoting something that’s not true,” Biden told CNN.

On its face, the “Break Up Big Tech Act” is an attempt to address such concerns by targeting bad actors, rather than the entire internet. In a statement, Gabbard claimed that immunity will still apply to those who “provide truly neutral social media platforms or search engines without the use of manipulative algorithms.”

The bill’s list of “manipulative” practices is broad enough that it could potentially impact a much broader range of companies than Gabbard and Gosar seem to have contemplated, however, as companies would lose immunity simply for allowing products to be sold on their platforms, or employing technology that engages users. The latter in particular arguably applies to all companies.

So, in effect, the bill could accomplish what Trump wants: repealing Section 230 entirely.

Some observers noted that this is just the latest example of Gabbard, who didn’t seek reelection, aligning with conservatives. Gabbard has also pushed legislation that would strip funding from schools that accommodate transgender athletes and an anti-abortion “born alive” bill.

Gosar is extreme even among conservatives, however. He flirts with QAnon conspiracies and has openly called for insurrection over the election.

As some have pointed out, should Section 230 be repealed as conservatives, and now Gabbard, desire, their big-tech nemeses won’t be the only ones impacted. Earlier this week, notorious internet forum Kiwi Farms said it would have to shut down if the law is repealed. Likely, other right-wing refuges like Gab, Parler, and even 8kun, would also be forced to close.