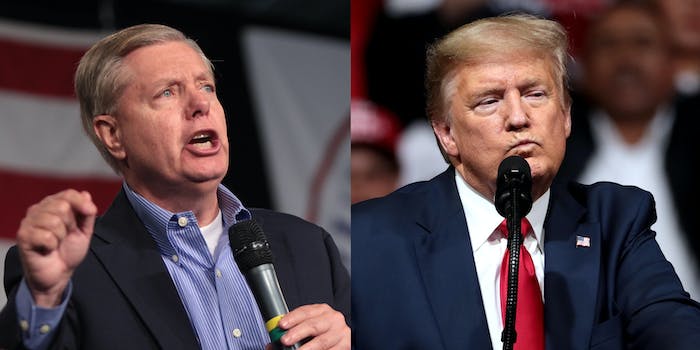 Trump's upset and Graham thinks he has a way to appease the president.

Sen. Lindsey Graham (R-S.C.) has suggested a solution to President Donald Trump’s threat to torpedo a coronavirus relief bill and massive spending bill: by “winding down” Section 230 of the Communications Decency Act as part of them.

Graham’s suggestion of adding a repeal of the important internet law comes as Trump has become somewhat fixated on repealing the law as his presidency enters its final days. Graham himself has also railed against the law, and just recently introduced a bill that would repeal it within two years unless Congress acts on it.

Section 230 shields all websites from being held liable for content posted on them by users. While much of the attention with the law has focused on Facebook, Google, and other tech giants, experts have noted that a repeal of the law would affect all websites with user-generated content and could have widespread ramifications on the internet.

Despite the law being backed by experts and tech advocates, lawmakers on both sides of the aisle—including the incoming Biden administration—have set their sights on it, setting up what will likely become a drawn-out fight over what exactly happens with the law.

On Tuesday night, Trump posted a video on Twitter where he threatened to throw a wrench into the $900 billion coronavirus relief package and asked Congress to make changes in it. Lawmakers have combined the relief package with a must-pass spending bill for the military and other parts of the government.

The president called the relief package a “disgrace” and has previously threatened to veto the military spending bill if it didn’t have a Section 230 repeal in it. Trump has gone as far as saying that a repeal was in the best interest of “national security.”

While Congress potentially has the votes to overturn a potential veto from Trump, Graham jumped in by suggesting they make it easier for the president to get behind.

First Graham suggested upping the direct payments to Americans to $2,000 per person like Trump floated, but said they needed to “go further.”

“I hope Speaker Pelosi will agree with President Trump that Big Tech needs to be reined in by winding down Section 230 liability protections,” Graham said as part of a string of tweets. “I have reason to believe this combination will lead to President Trump supporting the NDAA and COVID19 omnibus bills.”

While Graham may be trying to signal that he is trying to find a way to get the president’s signature on the bills, Section 230 has long been in the senator’s crosshairs.

Last week, he introduced a bill that would put a clock on changes to the law. His bill would repeal Section 230 on Jan. 1, 2023 unless Congress acts on it. He has also brought in the heads of major tech companies to testify before Congress ostensibly about the law, but the hearings devolved into a hodgepodge of gripes senators had about the companies.