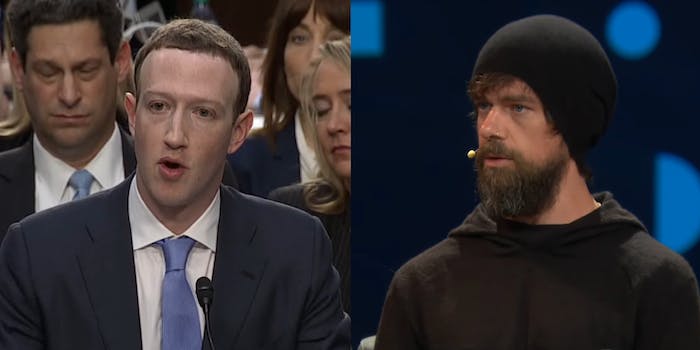 Dorsey and Zuckerberg are already testifying before a different Senate committee next week.

Senate Republicans on Thursday voted to issue subpoenas to Facebook CEO Mark Zuckerberg and Twitter CEO Jack Dorsey in the wake of the companies limiting the reach of controversial New York Post story about Hunter Biden.

The Judiciary Committee voted 12-0 to issue the subpoenas to testify about “online content moderation.” The Democratic members of the committee were not present, as they were also boycotting the vote to send the Supreme Court nomination of Amy Coney Barrett to the full Senate for a vote.

Chairman Sen. Lindsey Graham (R-S.C.) noted that Democrats on the committee asked him to delay the vote to issue the subpoenas, but he said he decided to move forward anyway.

“I’ve been asked by my Democratic colleagues to hold it over, and I think there is a lot of interest on the other side in getting some of the social media folks here to answer questions about their platforms,” Graham said. “So I’m going to move forward with the request today for the subpoena, hopefully give us some leverage to secure their testimony.”

It remains to be seen whether Zuckerberg and Dorsey will testify voluntarily, or the committee will use the subpoena.

Graham and Sen. Ted Cruz (R-Texas) said they wanted to subpoena the companies last week after the New York Post story’s link was blocked on Twitter and limited on Facebook.

Cruz at the time said that the two tech companies were “actively interfering in the election” over their decisions. Republicans, including President Donald Trump, have claimed that Silicon Valley has a bias against conservatives.

Zuckerberg and Dorsey are already testifying—along with Alphabet CEO Sundar Pichai—next week before the Senate Commerce Committee about Section 230 of the Communications Decency Act.