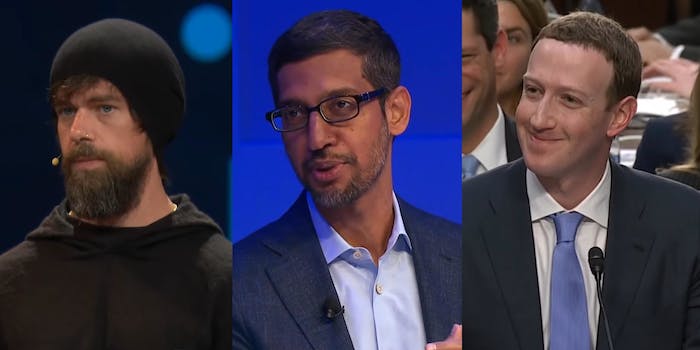 The Senate Commerce Committee voted on Thursday to subpoena the heads of major tech companies to testify about Section 230 of the Communications Decency Act, the internet’s liability shield.

Section 230 shields websites from being liable over the content posted on them by users. The law is what allows for comments and forums to flourish online and is known as the “twenty-six words that created the internet.”

However, the law has come into the political crosshairs from both sides of the aisle in recent months, from President Donald Trump’s social media executive order to several bills in Congress that target the law. Tech advocacy groups and companies have pushed back against the order.

The Commerce Committee voted unanimously to subpoena the heads of Facebook, Google, and Twitter to discuss Section 230.

There had initially been back-and-forth over the subpoena, according to Politico, but Sen. Maria Cantwell (D-Wash.), the ranking member of the committee, agreed to vote in favor of issuing them after the language was broadened to include a discussion about privacy and “media domination.”

“What I don’t want to see is a chilling effect on individuals who are in a process of trying to crack down on hate speech, or misinformation about COVID during a pandemic. Part of this discussion will end up being about the fact that some of these social media platforms have tried to move forward in a positive way and take down information that is incorrect,” Cantwell said during opening remarks. I welcome the debate about [Section] 230. I think it should be a long and thoughtful process. Not sure a long and thoughtful process will happen before the election, but I understand my colleagues’ desires here today.”

After the opening remarks by Cantwell and Chairman Sen. Roger Wicker (R-Miss.), the committee agreed unanimously to issue subpoenas to Jack Dorsey, of Twitter, Sundar Pichai, of Google, and Mark Zuckerberg, of Facebook, to discuss Section 230.

Trump’s social media order is using the executive branch to try and change Section 230, although there are questions as to whether the Federal Communications Commission (FCC) has the authority to do what the order asks it to do. Democratic presidential nominee Joe Biden has also raised concerns about Section 230.

Meanwhile, Congress has pushed forward several bills that target Section 230. Now, it will be able to seek testimony from Zuckerberg, Pichai, and Dorsey about it.