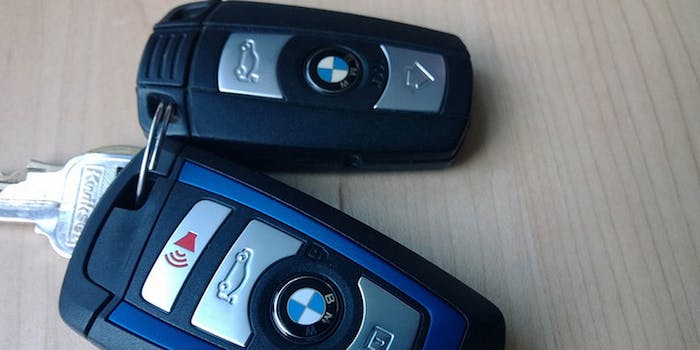 The equipment costs $1,000 and takes a matter of minutes.

At a security conference this week, a researcher will reveal a $1,000 technique allowing him to spoof the wireless signal from a key fob and break into a targeted car within just few minutes.

That $1,000 price mark may even come down as equipment drops in price, making it easier for more people to employ this kind of attack.

As you can see in the video below, this kind of attack isn’t limited to new cars. The targeted vehicle shown here is 10 years old.

The attack, which requires a hacker to be within wireless range of the car, also “must first identify a portion of the unlocking code that’s different for every vehicle,” Wired reports. A thief would, at any point before the attack, have to eavesdrop on his target using a key fob before he was able to break in.

Silvio Cesare, a researcher who works for Australian security firm Qualys, told Wired that one way to avoid his hack—especially if you think someone might be snooping on you  —is to simply use an old-fashioned key. If you’re not trained in spotting surveillance, however, that might be an exercise in futility and a recipe for paranoia.

Cesare is currently working to notify car manufacturers of the new hack.