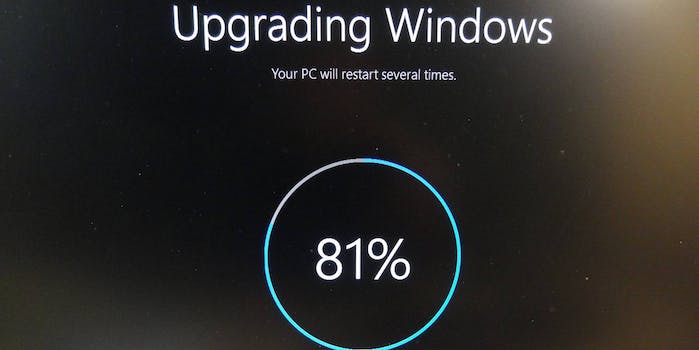 Back when Windows 10 launched, Microsoft made the generous promise to give everyone a free upgrade to the operating system for a full year. Today is the end of the grace period, so either finally let the update apply or you’ll have to fork over a pretty penny to upgrade in the future.

Before making the leap to the latest version of Windows, you should probably make sure it can actually be applied to your system. Any machine hoping to run Windows 10 requires a 1GHz or faster processor, at least 1GB of RAM, and 16GB of hard disk space. Microsoft has a list of more specifics that you can check if you’re still not sure.

It’s also worth noting that not every previous version of Windows automatically qualifies for the free upgrade. Your computer or tablet has to be running Windows 7 or later. If you’re on XP—or god help you, Vista—then you won’t be seeing Windows 10 on your machine without paying first.

If you’re stuck on one of the old OSes that doesn’t get the freebie treatment or you end up missing last call for the upgrade (Saturday at 5:59am EDT), then you’re going to have to open your wallet. The Home version of Windows 10 will cost you $120, while jumping to Windows 10 Pro costs $200. Both of those are considerably more than free.

If you’ve managed to ignore the never-ending onslaught of reminders to make the leap to Windows 10 that Microsoft has pushed on you and somehow avoided the forced upgrade, you might be wondering how to finally do the thing you’ve been putting off for so long.

Don’t worry, just head over to Microsoft’s handy download page and grab the Windows 10 client. Then follow all the steps it gives and you’ll have a Windows 10 machine in no time. Well, not no time; these things always take longer than you want. But hey, you’re the one that waited.