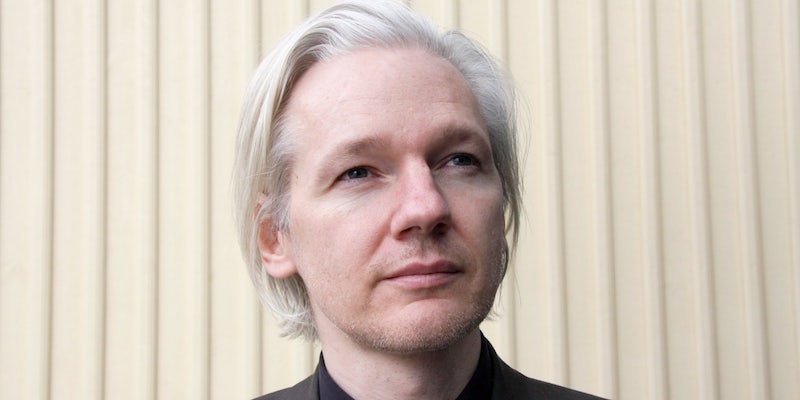 WikiLeaks will not be stopped so easily.

The insurgent online document publisher on Tuesday continued its release of emails from Hillary Clinton campaign chairman John Podesta. The latest batch comes one day after Ecuador cut WikiLeaks founder Julian Assange‘s internet connection at its London embassy, where he has lived for the past four years.

On Sunday, WikiLeaks began tweeting cryptic messages that sparked a flurry of speculation that Assange had been killed. Seven hours later, however, WikiLeaks said on Twitter that Assange’s internet connection had been “intentionally severed by a state party.”

Julian Assange's internet link has been intentionally severed by a state party. We have activated the appropriate contingency plans.

WikiLeaks later said that the state party in question was Ecuador, the same country that granted Assange asylum at its London embassy in August 2012 under the looming threat of a United States espionage investigation over WikiLeaks’ publication of classified U.S. government documents.

According to WikiLeaks, the internet block followed the publication’s release of Clinton’s paid speeches to Wall Street giant Goldman Sachs, which the Democratic nominee had refused to release.

Soon after its publication of the latest Podesta emails, WikiLeaks accused Secretary of State John Kerry of pressuring Ecuadorian officials to sever Assange’s internet connection before its release of Clinton’s speeches.

The John Kerry private meeting with Ecuador was made on the sidelines of the negotiations which took place pricipally on Sep 26 in Colombia.

In an email to the Daily Dot, a State Department spokesman denied WikiLeaks’ claim.

“While our concerns about Wikileaks are longstanding, any suggestion that Secretary Kerry or the State Department were involved in shutting down Wikileaks is false,” a spokesman told the Daily Dot. “Reports that Secretary Kerry had conversations with Ecuadorian officials about this are simply untrue. Period.”

The Podesta emails archive—which is said to total some 50,000 messages, of which WikiLeaks has so far published more than 17,000—has provided an unprecedented window into the inner workings of a major presidential campaign, as well as a behind-the-scenes picture of individuals who may serve in powerful positions in a potential Clinton administration.

While WikiLeaks has pushed back against any notion that Russian operatives provided it with the stolen Podesta emails, the FBI reportedly suspects it was Moscow hackers, according to the Wall Street Journal.

Adding fuel to the speculation of Russian involvement, pseudonymous hacker Guccifer 2.0, who began releasing emails stolen from the Democratic National Committee this summer and is widely believed to be working for Russia’s government, tweeted that they had “changed locations” after news of Assange’s cut internet connection.

For the Clinton campaign, Guccifer 2.0’s public thanks to WikiLeaks served as confirmation that the publication was doing the Kremlin’s “dirty work” in an effort to help Republican nominee Donald Trump win the presidential election.

“The open offer of coordination today by Guccifer 2.0, a known front for the Russians, makes it even clearer that WikiLeaks is doing Putin’s dirty work to help elect Donald Trump,” Glen Caplin, a Clinton campaign spokesman, told the Daily Dot in an email. He added: “When will Donald Trump stop denying the reality given to him by U.S. intelligence and finally condemn Vladimir Putin’s interference in our democratic process?”