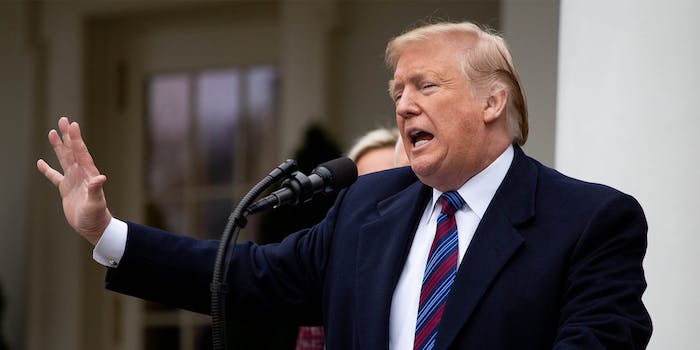 'Twitter has determined that it will allow terrorists, dictators, and foreign propagandists.'

The White House fired back at Twitter moderators on Friday morning after the tech company hid its tweet that warns protesters that “when the looting starts, the shooting starts.”

“This Tweet violated the Twitter Rules about glorifying violence,” the White House commented about the Palestine tweet. “However, Twitter has determined that it will allow terrorists, dictators, and foreign propagandists to abuse its platform.”

The White House went on the defensive after Twitter put a warning on a tweet originally from President Donald Trump. The president was writing about Minnesota protests for George Floyd.

“These THUGS are dishonoring the memory of George Floyd, and I won’t let that happen,” the tweet begins. “Just spoke to Governor Tim Walz and told him that the Military is with him all the way. Any difficulty and we will assume control but, when the looting starts, the shooting starts.”

Twitter flagged the tweet because it violated the social media company’s community guidelines for “glorifying violence.” The company later said it also worried that the tweet could potentially incite violence.

This is the latest skirmish between the White House and Twitter. Trump signed an executive order on Thursday after the company fact-checked his tweet earlier this week. The executive order will reportedly threaten social media companies’ legal protections if they are “partisan” when monitoring content.

In a statement to the Daily Dot, a Twitter spokesperson said that tweets with notices are unable to be liked, replied to, or retweeted.

“We’ve taken action in the interest of preventing others from being inspired to commit violent acts, but have kept the Tweet on Twitter because it is important that the public still be able to see the Tweet given its relevance to ongoing matters of public importance,” they said.