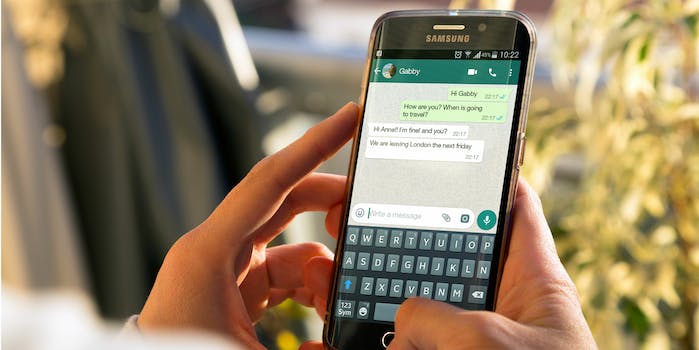 You only have 7 minutes to delete a text. Then hope it works.

WhatsApp wants to save you from the awkwardness of sending an instant message to the wrong person.

The Facebook-owned social media app is releasing a new feature that lets you “unsend” a message before the unintended recipient sees it. The third-largest social network by user base updated its FAQ page to include instructions for deleting a message you already sent to a group or individual chat this week.

To use the feature, open WhatsApp and go to the chat with the message you want to delete. Then just tap and hold the message or messages and select “Delete” (trash bin icon) from the menu on top of your screen. Then choose “Delete for everyone.”

This should be a great tool for people who haphazardly flip through messages, replying to each one as quickly as possible. But it does have some downsides. For one, both you and the recipient must have the latest version of WhatsApp downloaded for it to work. You can also only recall messages up to seven minutes after sending them.

Even more troubling, WhatsApp warns recipients might still be able to see your message after you pressed delete but before it gets erased, or if the feature fails altogether. That uncertainty might be reason enough to avoid using the feature.

It appears WhatsApp is rolling “Delete for everyone” out to users now. It will be available on Android, iOS, and even Windows Phone.