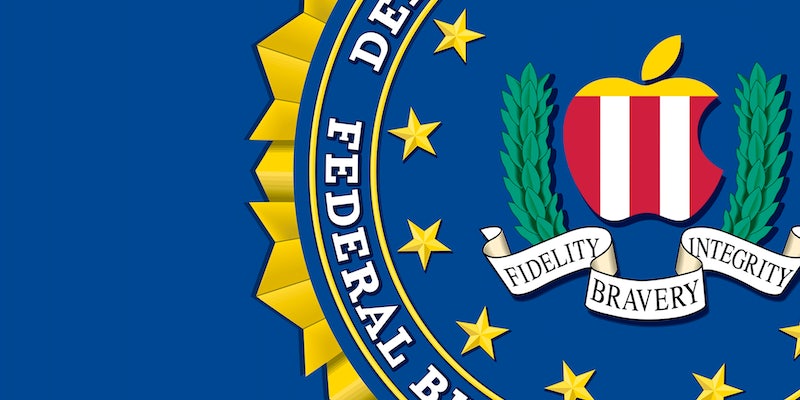 If you think this one is simple, think again.

On Feb. 16, a federal magistrate judge made a striking order: Apple must to help the FBI crack the phone of one of the shooters who murdered 14 people and injured 22 others in San Bernardino, California.

On the surface, that may seem like a perfectly reasonable request—and maybe, ultimately, it is. But the tech privacy world has erupted because of both the specifics of the case as well as the possible implications. If you think this case has a simple answer, think again. There’s a lot that can seem overwhelming here, so we’ve broken down the basics.

What does the FBI want to do?

Depending on how skeptical you are of the FBI’s intentions, this can be a loaded question. But here are the simple facts: The Bureau’s in possession of the work-issued iPhone that belonged to Syed Rizwan Farook, one of the two shooters in the Islamic State-inspired attack in San Bernardino. This phone, an iPhone 5c, is locked, and requires a four-digit code for access. A security feature—which may or may not be enabled—will delete the phone’s contents if someone incorrectly guesses the code 10 times in a row.

But there’s a loophole: iPhone software can be upgraded without inputting a password. So, the FBI wants Apple to write a unique operating system for this phone that would let the Bureau guess as many times as it wants. (It also wants to be able to guess passwords more rapidly, as the iPhone currently limits how quickly you can guess logins.)

Pretty wild that the shooters didn’t bother to further hide their communications before they went on that rampage.

Actually, after the attack, the FBI found two personal phones, smashed with a hammer, in their trash. That didn’t necessarily deter the Bureau, though. The FBI has sent them to their forensics lab, which is remarkably adept at restoring damaged devices.

But this case has nothing to do with that hardware. Farook was a health inspector for the Department of Health in San Bernardino County, California, and his coworkers made up the majority of victims. The phone in question is his work phone, issued by the county. And it wasn’t at home—it was in a family Lexus, not the SUV he and his wife and fellow shooter, Tashfeen Malik, used as a getaway vehicle.

The courts already found in favor of the FBI over Apple. Why won’t Apple just make the software?

There are at least four big arguments. First, there’s the ethical one: Apple CEO Tim Cook has, more than any other major American technology executive, been a vocal proponent of protecting users’ privacy from governments as an issue of civil liberties. To comply, Cook believes, would jeopardize Americans’ rights.

Then there’s the economic one: Apple claims that the custom operating system it would create to crack Farook’s phone could potentially be used on other (potentially all) iOS devices, either by law enforcement or hackers who manage to get their mitts on the code, potentially putting millions of iPhone and iPad users at risk. Further, if Apple is seen as easily tapped for information by the U.S. government, it opens up the company to international competitors who can claim to better protect their users. (Apple, for its part, says its refusal to comply with the court order is “absolutely not” a “marketing strategy,” as the FBI claims.)

There’s also the legal one: Yes, a court ruled that Apple must comply. But the law isn’t cut and dry, even to experts. The ruling relies on the All Writs Act, a 1789 law that can work as a catchall for when the law is especially unclear on certain circumstances, precisely because there’s isn’t good legal precedent here. Apple plans to appeal by Friday.

Finally, there’s the precedent argument: that this will set a “dangerous” precedent that, whenever law enforcement investigates somebody who’s used a tech product, courts can compel tech companies to go above and beyond to hack their own products.

Is it even possible for Apple to do what the FBI’s asking?

Yes, experts tend to think so, and Apple itself has said its engineers can do it.

Have noteworthy figures weighed in on which side they support?

Have they ever! The heads of many tech companies, including Google CEO Sundar Pitchai and Facebook’s Mark Zuckerberg, are on team Apple here. So is pretty much any privacy advocate you can think of, including NSA leaker Edward Snowden, who’s called this “the most important tech case in a decade.” Microsoft co-founder Bill Gates, however, has sided with the FBI.

Unsurprisingly, members of Congress who traditionally stand up for privacy support Apple here, and those most aligned with national law enforcement back the FBI. Americans themselves lean against Apple, with 51 percent supporting the FBI here.

Look, if an American court system tells an American company to help an investigation into a terrorist attack on American soil—and it’s technically possible—I don’t see the big deal. Are there any pithy hypotheticals you can throw my way that might change my mind?

If the US government dictating iPhone encryption design sounds ok to you, ask yourself how you'll feel when China demands the same.

Does China really take its cyber policy cues from the U.S.?

Yes, it often does, and it only began calling for so-called “backdoors”—deliberately engineered methods to undermine encryption, ideally to be only used for law enforcement but widely dismissed by technologists as a guaranteed way to make systems less safe—after the FBI started doing so.

Still, the FBI isn’t trying to create some sort of legal precedent here. It just wants into Farook’s work phone!

It’s true that the director of the FBI, James Comey, has explicitly blogged that, “The San Bernardino litigation isn’t about trying to set a precedent or send any kind of message.”

But multiple District Attorneys across the country have already said that, if Apple loses its appeal, they would indeed bring about similar requests to Apple.

Is Apple involved in other similar cases?

Yep! The Justice Department is currently pursuing approximately a dozen other cases, according to CNBC, although the details of those cases have not yet been picked apart.

How’s the court going to react in this case?

We’re not gonna touch that one.

Couldn’t the NSA do what the FBI is asking?

Maybe. We asked both, but for some reason neither has answered yet.