This pastel-hued social network wants you to feel its vibes

We all feel vibes, using that catchall word to casually describe when we first meet someone IRL (or URL) and get a sense of their energy.

Surely we all know which vibes we like and which we don’t, and then decide if we want to hang around and quietly absorb.

Vibes is also the name of an app created by San Francisco-based technologists Kate Losse and Amelia Greenhall, who met at a feminist hackerspace two years ago. They liked each other’s IRL vibes, started talking, and then realized that they had a lot in common. Losse was an early employee at Facebook, where she worked for five years and saw the birth of modern day social media. Greenhall has a background in electrical engineering and art, and had been working at startups doing product design. They started talking about the idea for Vibes, a messaging app based around #feels that didn’t feel as publicly performative as other social apps.

Essentially, Vibes came out of the gaps in social media that Losse and Greenhall kept seeing elsewhere. “On LinkedIn, Facebook and Twitter, you have to perform for this very large public you can’t really see and it’s both political and professional,” says Losse. “And Twitter has become more of a public square for politics.”

Losse and Greenhall felt like there was something missing in all of this socializing. 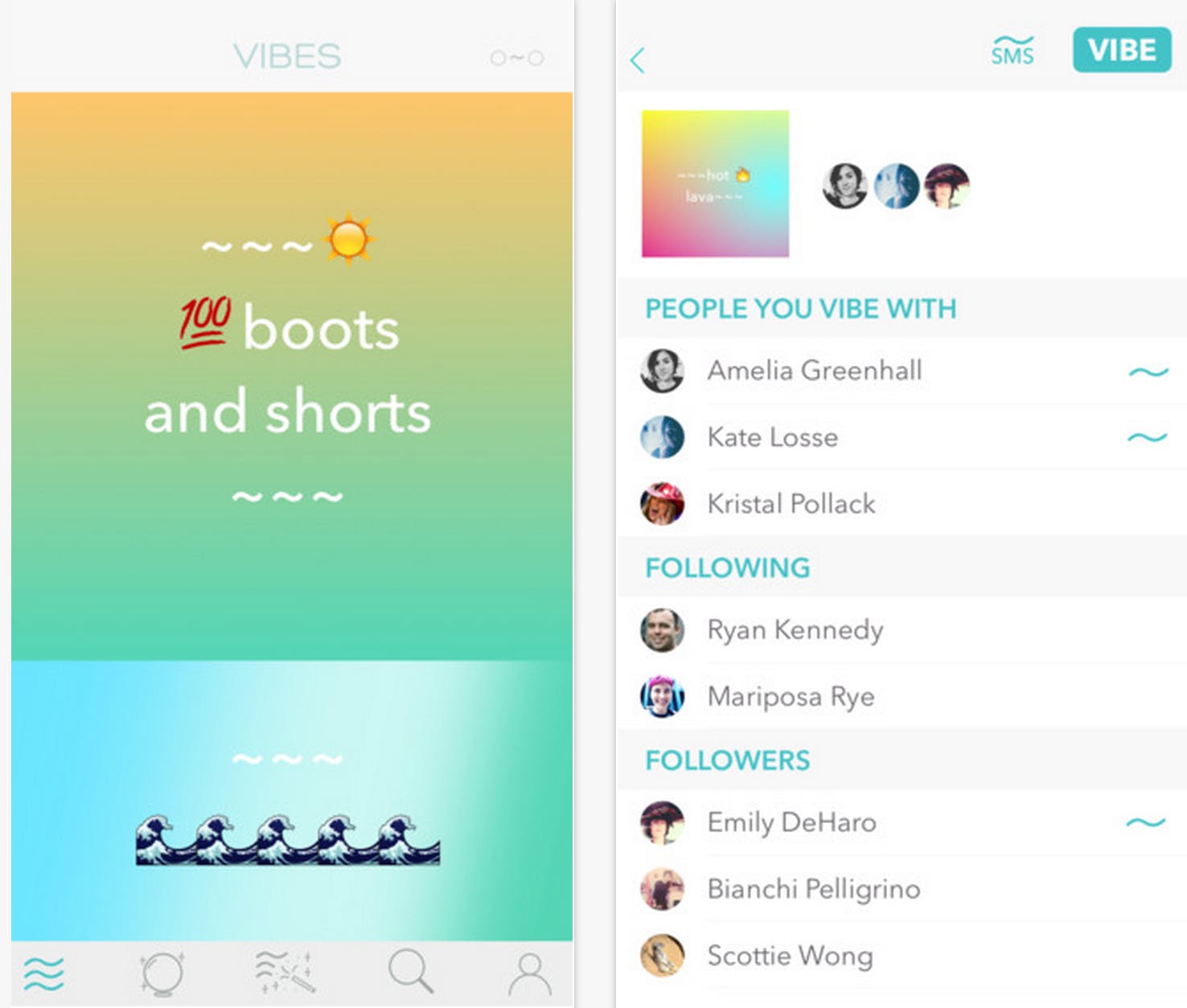 But what of the flat mobile screen space of a text or iMessage? Because of the transactional nature of that space, a text sent is a text that requires a response—one that reveals just how busy someone is, their relative level of interest, and if they are glued to their phone or not. But more often than not, and especially if one uses read receipts on iPhone, the text message is a transaction—a question and answer session.

The messaging functionality of Vibes is pretty much the opposite, with ambient messages appearing for those who you “vibe” and who vibe you. See a ~vibe~ pop up in the stream (the app includes a lot of ~squiggly lines~), and swipe right if you like and feel the vibe, and if not just keep on scrolling—or get off your phone and go do life IRL. There is no like, comment, or other connecting functionality.

“Being able to be a bit more ambient and less literal was really important to us,” says Greenhall. “That’s another example of a gap on Instagram and Snapchat. You have to have something in front of you to film or photograph, and then you can maybe write a little caption. That puts pressure on you to find things in the world that represent you. We wanted to create something that [encouraged] ease, relaxedness, like a good place to be.”

Unlike most of the super busy, overstimulating social networks we’re used to, the app is simple and aesthetically calming  It’s also not really a social network, and instead more of a stream for steady swimming, dipping, and ambient socializing. Vibes doesn’t necessarily offer you a way to connect so much as it does just to get a dose of feels and then, like, get off your phone and go hang out with friends in-person and just keep feeling vibes.

To login, just upload a single picture and create a username. There is no “real names” requirement, or really any requirements at all. Inside the app there are five things to do: go to the main ~ ~ ~ channel, where all the people you vibe with—notice I am not using the word “follow”—are chillin’, making squares using a selection of emoji and text. Scroll down and decide which images that represent people make you feel their vibes. If you feel the vibes, swipe right to tell that person you feel them. Then you’ll be added to a little list of people who also feel the vibe—but that list of people never just becomes a number. Because they are real people, ya know?

Of course, the swipe right is reminiscent of Tinder, a place where I happened to spend a lot of time this summer, and which ultimately made me feel like a piece of meat in meatspace. I am relieved to be in swipe retirement these days.

That’s not how I feel on Vibes, which is super conscious of making itself different from the other apps on the block. Basically, there is nothing that suggests the gamification of real life, as apps like Tinder offer, or the race for more followers and likes and favorites as we know quite well from Twitter and Instagram’s number-driven system. Then there’s Facebook, which is no better.

There are other ways to feel vibes rather than seeing them in a stream, swimming down your screen like invisible fish. If you’d rather feel vibes by looking at the current stream in a tiled format, you can do that by clicking on the crystal ball-like design at the bottom of the screen. Make your own vibe to put out into the universe by clicking on the wand and vibe-creation button. Swivel your finger around to change the ambient color background, add some text, leave plenty of ~ ~ ~,  and send vibes to the stream or send them directly to someone not on the Vibes app through a text message. Maybe they’ll enjoy your vibe.

People you follow and vibe with aren’t publically viewable, unlike Twitter, Facebook and Instagram, which default toward publically showing everyone you follow or are connected with. On Vibes, both the stream of ~vibes~ and the people you ~vibe~ with are entirely your own.

“In Vibes, there’s a built-in consent mechanism—that’s what vibing means to us,” says Losse. “Anytime someone [on the app] doesn’t want that relationship, they can stop but that doesn’t mean they have to unfollow.”