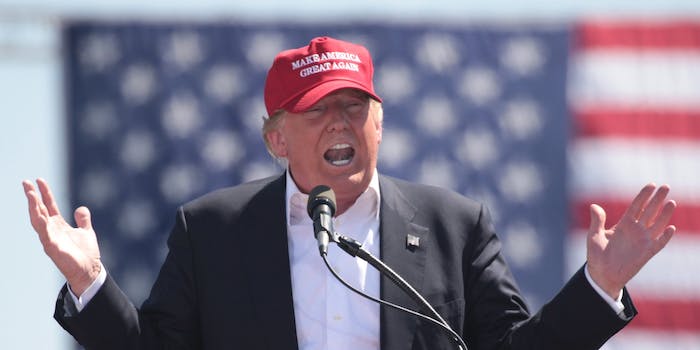 They're also remembering the things he said about John McCain.

Every year, on Nov. 11, Americans honor people who’ve served in the military with a national holiday.

Veterans Day, also known as Armistice Day, typically involves parades and public displays of patriotism. With the United States breaking daily records for new coronavirus infections and hospitals increasingly overwhelmed with patients infected with the deadly disease, this year Americans are largely relegated to celebrating on the internet.

And online, the holiday is making many people recall the time the president was accused of referring to military servicemembers as “losers” and “suckers.”

In September, the Atlantic reported that multiple sources had confirmed that President Donald Trump called veterans, specifically those killed in combat, “losers” and “suckers.” He reportedly also asked that wounded vets be kept out of military parades, saying of the injuries they received in service to their country, “Nobody wants to see that.” Trump categorically denied the reporting.

On this Veterans Day, as his lame-duck administration attempts to undermine the credibility of the election with unfounded claims of widespread voter fraud, the internet remembers.

“Today is #VeteransDay and just a reminder that Trump called our military ‘suckers and losers,'” tweeted one. “We will never forget nor forgive.”

Many Republican representatives’ Veterans Day messages were criticized because they support Trump.

A few pointed out that Trump’s efforts to stop ballot counts could disenfranchise military personnel, many of whom vote by absentee ballot.

Others recalled Trump’s remarks about the late John McCain, who was a prisoner of war for five years during the Vietnam War. Trump called McCain a “loser” and denied that his service was heroic.

After tweeting multiple times about his election loss, at 9:07am CT, Trump recognized Veterans Day with a tweeted link to the White House proclamation about it. He did not comment on the link.