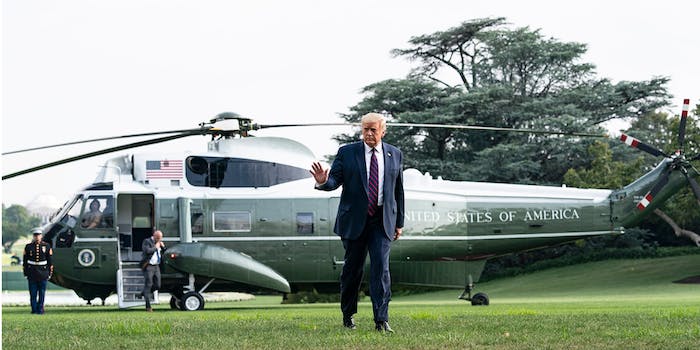 Twitter may suspend you for wishing Trump dies from the coronavirus

Social media companies are drawing the line on comments regarding President Donald Trump after users began wishing for his death following his contraction of the coronavirus. Trump was taken to Walter Reed National Military Medical Center on Friday for what’s intended to be a few days’ stay.

As news broke Thursday that the president had caught the highly contagious disease, users on sites such as Facebook and Twitter reacted with everything from conspiracy theories to internet memes about the diagnosis.

A significant number of users who were critical of Trump’s response to the pandemic openly wished for the president to die from the illness.

In response, social media platforms are now being forced to juggle considerations surrounding free speech against their policies regarding “abusive behavior.”

In a statement to Motherboard, a Twitter spokesperson stated that its users are not permitted to wish death upon the president due to its current rules.

“Content that wishes, hopes or expresses a desire for death, serious bodily harm or fatal disease against an individual is against our rules,” Twitter said.

Twitter added, however, that it does not intend to take action against every tweet and is instead “prioritizing the removal of content when it has a clear call to action that could potentially cause real-world harm.”

Twitter has not clarified how it’s classifying “real-world harm” with regards to tweets wishing for the president’s death.

Facebook appears to be taking a different approach. As noted by Motherboard, Facebook states that it makes exceptions for certain rules depending on whether an individual is a public figure.

Facebook argues that its ultimate goal is to “allow discussion, which often includes critical commentary of people who are featured in the news or who have a large public audience.”

“For public figures, we remove attacks that are severe as well as certain attacks where the public figure is directly tagged in the post or comment,” Facebook’s guidelines state.

The rule suggests that so long as users do not tag the president’s account, comments wishing for his death will not be removed.

All in all, neither site appears interested in removing negative comments regarding the president’s well-being. Given that Trump just days ago mocked former Vice President Joe Biden for wearing masks, a large number of users may not be concerned, either.