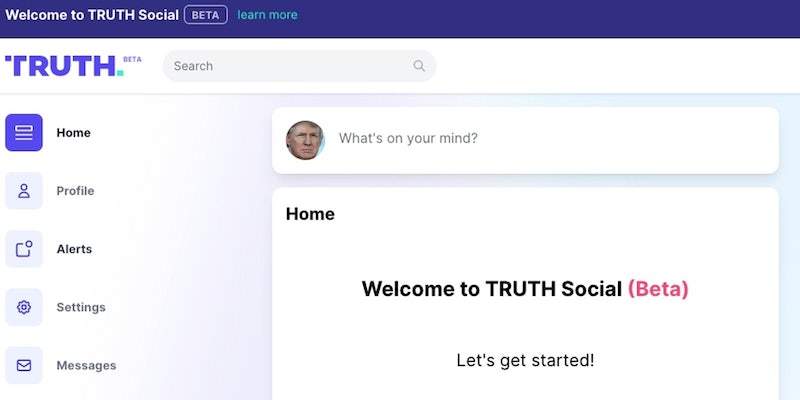 A beta version of Truth Social used internally by the development team at the Trump Media & Technology Group (TMTG) is publicly accessible online, allowing anyone with knowledge of its location to register an account.

The internal beta—which is separate from the mobile beta app currently being used by Trump himself and a handful of his biggest allies—is a Progressive Web Application that developers, their friends, and other high-profile figures at TMTG have been using to report bugs for several months.

And it appears that at least one user, likely a developer of moderator, posted content seemingly in favor of Chilean dictator Augusto Pinochet.

Former President Donald Trump announced last October his plans to build a new social media network in the wake of his removal from platforms such as Facebook and Twitter following the Jan. 6 Capitol riot. Within hours of the announcement, a hacker, who spoke exclusively with the Daily Dot at the time, revealed that they had found Truth Social’s mobile beta. The discovery allowed numerous individuals, including some at the Daily Dot, to register accounts using the handles @donaldtrump and @mikepence, among others.

The mobile beta was pulled offline shortly after. Yet two months later in December, the beta for Truth Social was discovered online again, leading developers to relocate their webpage for the second time. The Daily Dot discovered the new location of the beta site almost immediately after and, thanks to a tip from the security researcher known online as WhiskeyNeon, found that a verification page used to register accounts was accessible as well.

Over the weekend Reuters reported that the mobile app for Truth Social will become available to the public on Monday.

Among the few hundred accounts included on the internal beta are those of former congressman Devin Nunes, who currently holds the position of CEO at TMTG. Numerous profiles have also been set up for a range of media outlets, including ESPN, TMZ, and CNBC, all of which are merely RSS feeds unassociated with the actual companies.

But not all of the accounts are directly tied to identifiable users. An account with the handle @tmtgmod5 (Trump Media & Technology Group moderator 5) appears to be dedicated to Pinochet, a brutal general who ruled Chile from 1973 to 1990 before being arrested in London in 1998 on “charges of genocide and terrorism that include murder.”

Titled “Papa Pinochet,” the account hosts numerous memes and statements in support of the deceased dictator. Numerous posts, known on the platform as “Truths,” reference Pinochet’s history of throwing political prisoners to their deaths from helicopters.

“Free Speech is making a comeback, and so are the helicopters,” one post said on Feb. 11.

It remains unclear if the account is part of Truth Social’s effort to train its moderation systems to flag content in violation of its rules. TMTG did not respond to an inquiry sent by the Daily Dot regarding the account.

Other accounts such @tmtgmod2 and @tmtgmod3 either made no posts or simply shared mundane pictures of animals. Another account openly stated in its bio that it was for moderation purposes.

“I am testing moderation for the Alpha & Beta launch,” the account’s bio reads. “I need to test images, videos, text, and audio. This account is for testing purposes only.”

The account’s posts could provide an insight into what types of content Truth Social intends to block. Some posts contain still frames from execution videos and pornography. Other posts use racial slurs and discuss prostitution while linking to the online service OnlyFans.

But many posts show photos of firearms, suggesting that Trump’s social media site could potentially keep weapons from being shared or sold on the platform.

The publicly accessible beta site also appears to include sensitive information. Photos uploaded by one developer showed TMTG’s Slack channel as well their username and password for the site.

At least three users even criticized some media outlets for initially and incorrectly reporting in October that the Truth Social mobile beta had been “hacked.” Journalists were described by two users as “savages” and “Bottom feeders.”

“‘[S]avages’ is right!” one user wrote. “Bottom feeders, again, suckling on fake news to get viewers. Pathetic doesn’t even describe it!!”

Much of the activity on the internal beta app is related to testing out features and reporting bugs. Settings for the app, which has been touted as a free speech platform, show that users can choose whether to hide images deemed “sensitive.” Images, including those of a women’s cleavage, were uploaded in what could have been an attempt to test out the platform’s ability to detect so-called sensitive material.

Another user even uploaded a meme comparing Trump to Nazi ruler Adolf Hitler, although it is likewise unclear if the post was being used to test Truth Social’s ability to flag certain imagery. Truth Social’s terms of service appear to suggest that disparaging the former president is off-limits.

Another setting in the app allows users to enable a “Demetricator” just like Twitter. The Demetricator lets account holders hide all likes, follower counts, and reTruths in order to protect their mental health.

“Decrease social media anxiety by hiding all numbers from the site,” a description on the feature states.

With its launch imminent, it’s unclear if the platform’s continued security woes will affect its success.