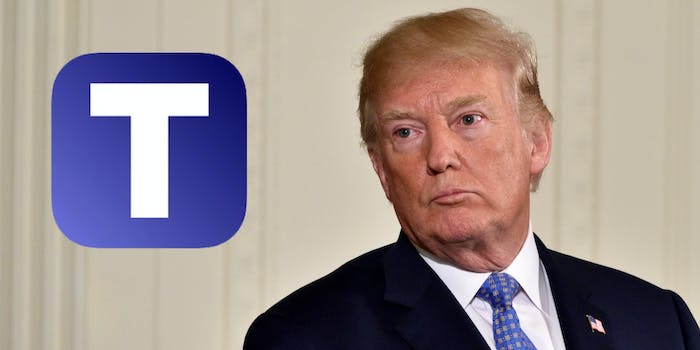 The terms of service for 'Truth Social' are all over the place.

Former President Donald Trump is launching his own social media platform and the site’s terms of service make it clear: In order to be on it, you can’t be like Trump.

The launch of the site isn’t unexpected. The former president has consistently railed against big tech companies for a perceived bias against conservatives. It has also long been rumored that Trump would set up his own social media platform once he was booted from the major ones following his posts in the wake of the Capitol riot earlier this year.

The former president even launched his own blog earlier this year, only to quickly shutter it because no one read it.

Late Wednesday, “Truth Social” was announced, with a goal of opening it up to the public early next year. However, the site has already unveiled its terms of service—and it has some interesting additions.

Truth Social makes it pretty clear you can’t make fun of it or anyone who works for them in order to use the site.

Specifically, the site says that in order to use “Truth Social” you have to agree not to “harass, annoying, intimidate or threaten” anyone who is an employee of the site or one of its agents. It isn’t clear if Trump is one of those people.

Trump, meanwhile, routinely threatened and harassed the people below him in the federal government.

It also makes it clear that you can’t “disparage, tarnish, or otherwise harm, in our opinion, us and/or the Site.”

Perhaps the most out-there agreement a user has to make for using the site is being OK with not using “excessive capital letters.” Trump infamously used capital letters in hundreds of his tweets before being banned.

The bizarre inclusions in the terms of service were noticed by many people online.

“Trump’s new ‘free speech’ social network TRUTH bans any criticism of itself. Buried in the terms of service: ‘Users must not disparage, tarnish, or otherwise harm, in our opinion, us and/or the Site.’ Presumably that includes no criticism of Trump himself too,” Mike Sington, an executive at MSNBC Universal tweeted.

As others have pointed out, other websites use similar language in their terms of service, specifically the one that makes users agree not to “disparage” the site.

That doesn’t make it less funny that a “free speech” endeavor would place restrictions on people being mean to the site.