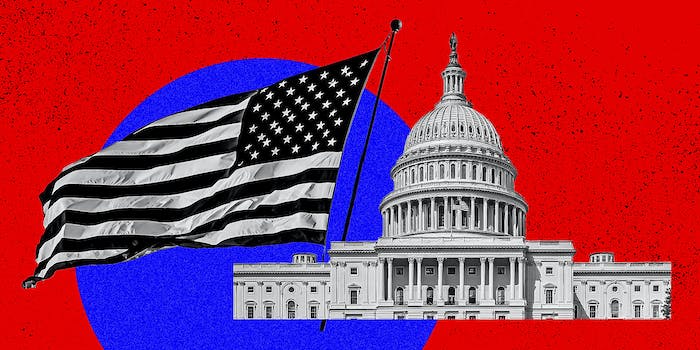 The future is a false flag: How Jan. 6 rioters prove Trump-world will never accept the truth

They've blamed the Capitol riot on everyone but themselves.

It’s not surprising that Jan. 6, 2021—the day in which supporters of former President Donald Trump stormed the U.S. Capitol over election fraud conspiracy theories—has devolved into its own conspiracy by the very people who partook in it.

Despite countless attendees initially praising the riot, the nationwide backlash that would soon follow quickly led conservatives to fall back on the very type of outlandish claims that had spurred their violent actions to begin with. One year later, those conspiracy theories have only grown.

Text messages released last month by the House Select Committee tasked with investigating the riot show that Trump’s inner circle, including notable figures such Donald Trump Jr. and multiple Fox News hosts, were well aware of how damaging his supporters’ actions were.

“We need an Oval office address. He has to lead now,” Trump Jr. wrote to then-White House chief of staff Mark Meadows on Jan. 6. “It has gone too far and gotten out of hand.”

Trump Jr. even tweeted that day to publicly decry the violence.

“This is wrong and not who we are. Be peaceful and use your 1st Amendment rights, but don’t start acting like the other side,” he wrote. “We have a country to save and this doesn’t help anyone.”

But in the days and weeks following the attack, the pro-Trump internet would concoct the ultimate scapegoat for the twice-impeached former president and his cohorts.

It wasn’t Trump supporters who were responsible—despite being told by Trump to come to Washington, D.C. and march on the Capitol—but all of Trump’s political enemies. In other words, those who were opposed to Trump had framed his movement by carrying out a “false flag” attack.

At first, conservatives cast the blame on far-left activists operating under the banner of antifa. The evidence? Just a flyer supposedly discovered on the streets of D.C. that urged anti-fascists to disguise themselves as Trump supporters in order to infiltrate the protest.

Not only that, Trump supporters alleged that police had escorted busloads of antifa activists to the Capitol. No evidence whatsoever points to such bus escorts taking place. And the alleged flyer was nothing more than a fake that had been circulating online since at least 2017.

Although the antifa claims were undoubtedly false, the narrative was far too enticing to let go for Trump supporters desperate to avoid responsibility.

Numerous far-right figures even initially accused the now-infamous “QAnon shaman,” real name Jacob Chansley, of being an antifa activist. Everyone from disgraced lawyer Lin Wood to conspiracy theorist and conservative pastor Mark Burns asserted that Chansley wasn’t a real supporter of Trump. In reality, Chansley was a well-known, right-wing activist associated with the QAnon conspiracy theory who was ultimately sentenced to 41 months in prison for his involvement in the riot.

When the evidence that Chansley was nothing more than a pro-Trump rioter became abundantly clear, conservatives would quietly move on to their next target.

Trump supporters were certain that they had finally found their scapegoat in John Sullivan, a self-described racial justice activist and independent reporter who had breached the Capitol. Founder of Insurgence USA, an activist group focused on “racial justice and police reform,” Sullivan had been found to have previously attended protests by the Black Lives Matter (BLM) movement.

But Sullivan’s background isn’t that simple. Prior to being arrested and charged, Sullivan denied belonging to antifa and argued that he was merely covering the protest as a journalist in comments to Rolling Stone.

“I was worried about people recognizing me and thinking that I was antifa or, like, BLM or whatever,” Sullivan said. “The entire time they’re yelling, ‘F*ck antifa! F*ck, BLM.’ I’m not saying I’m antifa, by any means. But I definitely believe Black Lives Matter.”

It turns out, however, that left-wing activists had repeatedly kicked Sullivan out of their own protests long before Jan. 6. The activist group Rebellion Baby accused Sullivan in November 2020 of engaging in “alarming behaviors including grifting/profiteering, self-promotion/clout chasing, sabotage of community actions, threats of violence, and—maybe most disturbingly—ties to the far-right.”

Law enforcement sources speaking with Fox News even stated that Sullivan had no known history with antifa. Even so, the notion that Sullivan, who would later be charged for his involvement in the riot, somehow singlehandedly convinced hundreds of Trump supporters to storm the Capitol is nonsensical at best.

FBI Director Chris Wray also told lawmakers in early March that he had not seen any evidence that fake Trump supporters or left-wing activists had been involved in the riot as well.

“We have not to date seen any evidence of anarchist violence or people subscribing to antifa,” Wray said.

Unsurprisingly, conservatives would soon shift the blame for Jan. 6 yet again. And this time, the FBI itself would become the primary target.

The right-wing blog Revolver News would release an article in mid-June merely asking whether the FBI had orchestrated the failed insurrection. Despite the article offering no evidence whatsoever to back the claim, conservatives would cite the report as definitive proof of federal involvement in the Capitol riot.

The article would be praised by everyone from Fox News host Tucker Carlson to conservative legislators like Rep. Matt Gaetz (R-Fla.), even as the author of the piece admitted that he did not have any concrete evidence.

With their new narrative set, conservatives would go from accusing their fellow protesters of being in antifa to being in the FBI. The first such target would be Ray Epps, an Arizona native who was present at the Capitol on Jan. 6.

In yet another article in October, Revolver News would suggest that Epps appeared to be a “Fed-Protected Provocateur.” And just like their prior piece, no actual evidence would be presented.

The accusations against Epps, a former Marine sergeant and former Oath Keepers militia member, stemmed from numerous videos in which he was seen encouraging other protesters to enter the Capitol the day before and of the riot. Conservatives also noted that Epps wasn’t in custody, proof in their minds that the man was working for the federal government.

While Epps behavior could be viewed as suspicious, the fact remains that no evidence has been shown to connect him to the FBI. While the FBI has a long and ongoing history of infiltrating far-right groups, the notion once again that Epps, Sullivan, or anyone else is to blame for Jan. 6 ignores the months of comments before the riot in which Trump supporters openly discussed using violence.

But Epps wouldn’t be the last right-wing individual to be blamed for the Capitol riot. The conspiratorial blog Gateway Pundit, seemingly attempting to earn the same viral attention as Revolver News, would accuse a much more prominent far-right figure of working for the FBI.

In an article just last month, the blog insinuated that Anthime Joseph “Tim” Gionet, the white nationalist known online as Baked Alaska, could have been a federal provocateur as well. Just like the pieces from Revolver News, the Gateway Pundit’s report would fail to offer any evidence for the accusation.

The article would rely on the same talking point that Gionet not being in jail was evidence of his FBI ties, despite the vast majority of the hundreds of Trump supporters charged over the riot not being incarcerated either.

Gionet had been in jail after being arrested by the FBI in January for his involvement in the riot but was later released on bond. The white nationalist is currently facing numerous counts such as unlawful entry, violent entry, and disorderly conduct on Capitol grounds.

With one year having passed since the attack and the investigation into the events of that day ongoing, conservatives will undoubtedly continue following the same conspiratorial playbook in order to blame anyone but themselves for the Capitol riot. And it’s that unwillingness to accept the most obvious reality, that should leave people wondering: Just how many lies can one group get away with?