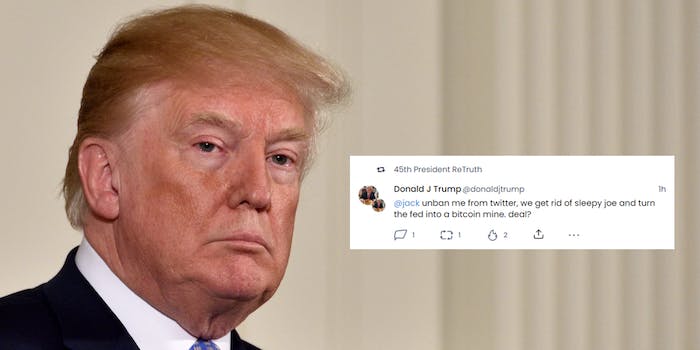 Last night, former President Donald Trump announced the launch of Truth Social, his new social media platform. Trump’s been threatening to launch his own platform for months. Earlier this year, he launched and quickly abandoned a personal blog.

Within hours of the news breaking, Truth Social was broken.

Someone quickly discovered a link to sign up, however. Aubrey Cottle of Anonymous fame tweeted the link and invited everyone to “come join the party.”

People flocked to it, claiming handles associated with Trump and other high-profile people, such as Twitter CEO Jack Dorsey and former Vice President Mike Pence.

Whoever was running @donaldjtrump posted the meme of a pig defecating on its testicles.

Amid massive trolling, Truth Social went down. It suspended new accounts and disabled all the accounts that had been created.

Attempts to sign in returned an error notice that said, “You can no longer use your account, and your profile and other data are no longer accessible. You can still login to request a backup of your data until the data is fully removed, but we will retain some data to prevent you evading the suspension.”

Mere hours passed between the announcement and the site going down. People were highly amused.

“Haha Truth Social lasted 2 hours! To all you Twitter folks who trolled it and created dummy accounts you are heroes!” tweeted @Steelersgirl217.

As of Thursday morning, Truth Social was back up. But it wasn’t exactly running. People with existing accounts who attempted to use the search bar received a message that said, “Oops! An unexpected error occurred.”