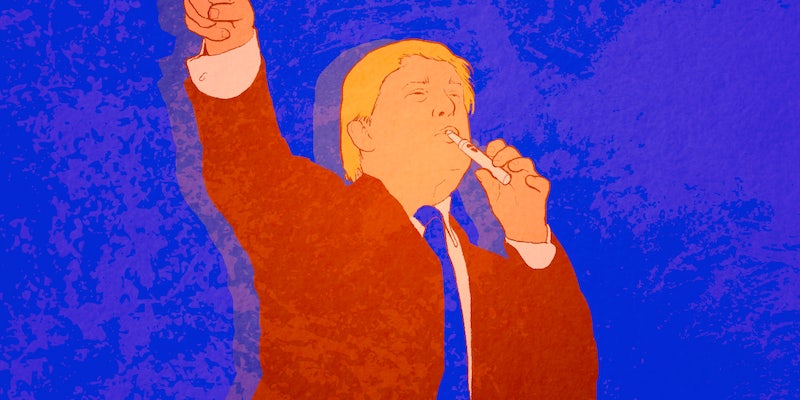 It's what Trump doesn't say that counts.

White supremacists hear Donald Trump loud and clear—even when it seems like he’s saying nothing at all.

Ever since Trump’s 2016 presidential campaign began last summer, American white supremacists have been drawn to him. They approve of both what he says—the proposals to ban Muslims and deport millions of Latino immigrants, to name a pair of high-profile examples—as well as what he doesn’t say.

This weekend’s controversy over Trump and the KKK exemplifies the process.

During an interview with Jake Tapper on CNN’s State of the Union on Sunday, Trump hesitated to condemn the endorsement of David Duke, a former Grand Wizard of the Ku Klux Klan.

“I have to look at the group. I mean, I don’t know what group you’re talking about,” Trump said in response to Tapper asking if he’d disavow Duke and the KKK. “You wouldn’t want me to condemn a group that I know nothing about. I’d have to look. If you would send me a list of the groups, I will do research on them and certainly I would disavow if I thought there was something wrong. You may have groups in there that are totally fine—it would be very unfair. So give me a list of the groups and I’ll let you know.”

Visibly annoyed, Trump eventually disavowed the endorsement after it became a minor scandal over the weekend. He blamed his delay in doing so on a “lousy earpiece.”

As I stated at the press conference on Friday regarding David Duke- I disavow. pic.twitter.com/OIXFKPUlz2

In that days-long hesitation to distance himself from the Klan, supremacists saw a wink and nod to their side.

“He’s playing the game that needs to be played to be elected but skirting hints everywhere,” said a member of Stormfront.org, the iconic Internet home of American white supremacy. “This most of all is going to bring national attention and more followers to David Duke.” 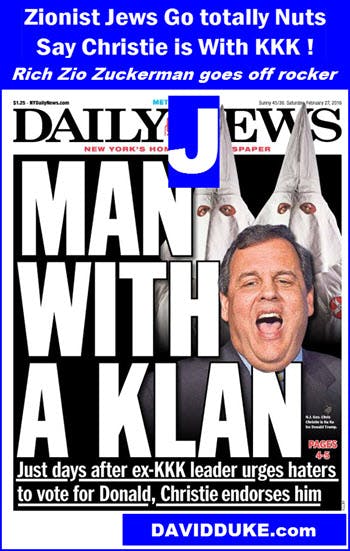 Duke even made a self-described “Great Meme” in which he switched the name of the New York Daily News to “Daily Jews.”

“We are going viral on everything right now!” Duke said. “Help it go big!”

“[Trump] knows full well who David Duke is,” another Stormfronter said. “He’s just evading the question because he knows who his real supporters are.”

The white supremacists are advocating a strategy known widely as dog-whistle politics, the use of coded language that means one thing to the mainstream and another to the “in-the-know” supremacists.

Like a dog who can hear ultrasonic sounds rendered silent to human ears, white supremacists are sure they above all else can perceive the real message.

Even if Trump isn’t outright saying “White Power!,” many supremacists not only believe that’s a big underlying foundation of his message; they believe he’s smarter and more clever than the white nationalist candidates before him for exactly that reason.

Now more than ever, Trump is at the center of the supremacist conversation. 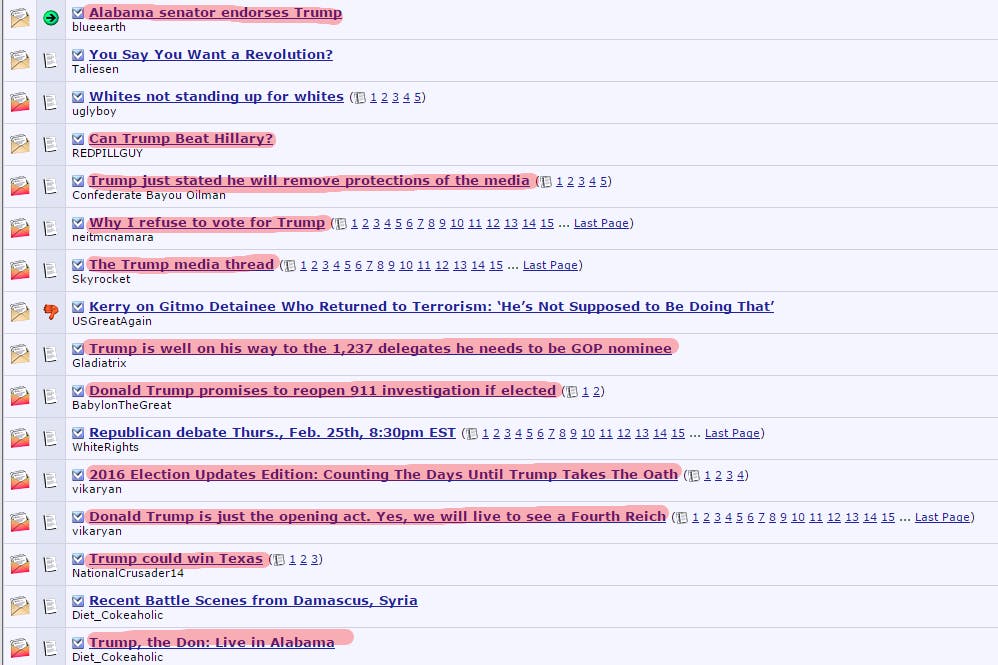 White supremacists are not the only people supporting Trump’s candidacy, of course. Trump is backed by 49 percent of Republican voters, according to a new CNN-ORC poll, and he’s widely favored to carry the majority of the 12 states voting on March 1, Super Tuesday.